Have I mentioned how much I love this gig? Not lately, because my way better half sez it might sound like gloating.

OK, I’ll risk being a gloat-meister. I got to spend the afternoon drinking delicious wines with wonderful friends in the trade, many of whom I was way overdue to catch up with. Oh, and I got to yack for a good while with three hale vintners well met: Joel Gott, Charles Bieler, and the utterly inimitable Charles Smith. 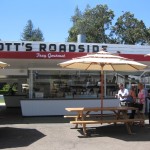 I got to thank Joel for resuscitating Taylor’s Automatic Refresher (now Gott’s Roadside), where the amazing burgers and fries provide the perfect antidote to a day of red-wine imbibing in the Napa Valley. I also thanked him for his sauv blanc and zin.

I got to talk to Bieler “” who makes the Charles & Charles Rosé with Smith and his own eponymous rosé from France, both marvelous quaffers “” about vintage variation for an upcoming newspaper column.

He echoed what local importer Annette Peters had told me last week, that there’s more year-to-year consistency when the grapes are geared for rosé and made with skin contact for a day or three rather than the ones made as a by-product of red wine with the bled-off juice in what’s known as saignée. Makes sense: The latter wines are a secondary consideration to the red wines made from the same grapes. 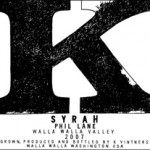 I spent the most time with Smith, who was funny and forthright. He said the name of his first wine, K Syrah, had only a bit to do with the catchphrase, that it was also about having something representative of the West (the logo resembles a livestock brand), and putting forth a “sturdy” image that evoked the wine.

He talked about his insistence on small yields, no matter the grape. He was not the least bit pedantic about it, but quite firm. In fact, he smiled often throughout our conversation as bowling balls thumped onto the lane a few feet away.

A former rock-band manager, Smith is a self-taught winemaker. I asked if that’s a route he recommends for others. He said it can work for someone who knows a lot about wines (plural) and “has a really good palate.”

This often gets overlooked in the wine world, that the person deciding on the final blend of any and every wine needs to be able to choose the just-right admixture. As those of us who have to check out a lot of samples well know, more than a few winemakers clearly do not

have great palates. Smith (shown here with my friend Lisa Impagliazzo and some larger man) clearly does.

Smith was wearing a bowling shirt from one of the world’s great music venues, the Rock ‘n’ Bowl in New Orleans. I asked who was playing the last time he was there, and after thinking for a second, he said “I don’t know. I was bowling great, and they were playing great.”

I asked if he had anything new in the works. Smith’s eyes lit up even more than usual as he talked about a high-elevation chardonnay vineyard he has discovered. “We’re gonna have some fun with that one,” he said.

And based on all the evidence in his bottles to date, the rest of us are gonna have some fun drinking it.