For years, Clay Shannon only dabbled in the wine world. Of late he’s been digging in — figuratively and literally — and digging it.

A longtime farmer of fruit and sheep, he got his first vinous dose with Kenwood in 1980. “I loved being outside and smelling diesel and dirt,” he said. “So I bought a tractor and started doing custom farming.” 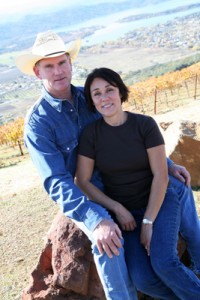 his life in unexpected ways. “In 1993 we got this great crop, made $102,000, totally unexpected,” Shannon (left, with wife Margarita) said. “So I quit [growing for] Sutter Home and said I was gonna be an almond farmer. I hated grapes back then anyway.

“Well, that worked for about 10 months.”

So he went back into vineyard management and started hearing about some fabulous red dirt in the mountains in Lake County (the focus of my most recent Star Tribune column). He found promising land, bought 80 acres and started planting in 1997. Now he has 2,200 acres, 850 of them planted with grapes, in Lake County, and his Shannon Ridge winery produces stellar wines for amazing prices.

The winery’s High Elevation line is priced at $12 and includes as hearty and tasty a cabernet as you’ll find anywhere for that price, plus classic, grippy petite sirah and gorgeous, juicy sauvignon blanc. The Home Ranch wines also bring it, value-wise, in the $23 to $30 range.

Stunning growth and superb value didn’t come quickly or smoothly, though. Or conventionally: Shannon is the first vintner I’ve heard speak positively about the economic downturn, which in his case turned a money-losing business into a highly profitable one.

“In 2008 when the recession hit, people started trading down and found our wines,” he said. “People used to have a $20 bill and would buy one wine. In the recession, they want to buy two bottles. The thing took off, and we started understanding the business. We knew farming

but not distribution and programming. I went out and bought a bunch of suits, and all that did was make me feel uncomfortable.

“Our motto when we started making wine was ‘We don’t have a plan, but we’re sticking to it.’ We are starting to plan more now.”

They also have learned a lot about what to plant where, finally pulling up some cabernet where it wouldn’t ripen and planting chardonnay there. “We have young vines and are just starting to learn about some areas,” he said. “We’re also starting to use different clones.”

What Shannon knew all along was that he had some great dirt to work with.

“Up here we have a lot of well-drained soil with medium potassium and high calcium … and with a magnesium deficiency,” he said. “That’s the kind of soil that grows some of the world’s best fruit.”

But it’s what Shannon has done atop that soil that’s most interesting. A longtime sheep farmer, he had herds near the vineyards. 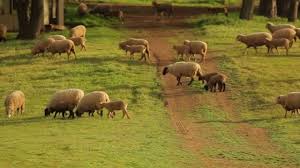 “Somebody left the gate open one day, and the sheep got into the petite sirah vineyard,” he said. “They ate the leaves they could reach on the vines and the ground cover. It’s the perfect circle.”

So the sheep save labor and (ahem) fertilizer costs, and as Shannon puts it, “the grass is feeding protein, and the world needs meat.”

He calls the program the Ovis Cycle (more on it here), and he named his Vigilance Vineyard after the foremost trait of the sheep dogs.

And then there’s the final part of the circle: Shannon Ridge’s petit sirah, cab and the sturdy, seriously swell “Cimarron” blend pair beautifully with … lamb.