Raptor Ridge is one of my favorite Oregon wineries, and not just because ambassador extraordinaire Annie Shull is from Minnesota. The wines Annie’s husband Scott crafts are 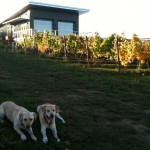 My ardor also entails the personality that the Shulls bring to the enterprise they co-own. They’re earnest but fun, with uncommon savvy about what brings so many of us to wine. Plus, they have great dogs. The winery got its name from the kestrels, hawks and owls that heavily populate the Shulls’ property.

In fact, the Shulls’ home vineyard, tucked into the Chehelam Mountains, is called “Tuscowallame,” which of course is the indigenous word for “place where the owls dwell.” And Raptor Ridge has a swell feature for its club: a “Democracy Challenge” in which members taste three different cuvees and provide input on a final blend. 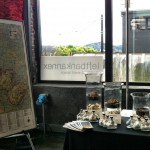 But their best idea for their customers has to be the soil aroma kit at their tasting room outside Newberg, Ore. I seriously want to get there yesterday and check this out.

Being able to smell the original ingredient that might be evoked in the wines, then tasting the juice, is a surpassingly cool process. Not to mention checking out the various elements that make the local soil so suitable for great wine. I could really geek out on all of this.

Over brunch during a recent Twin Cities visit, Shull shared an interesting anecdote about her pinot gris: “Through the course of several months, I have noticed how quickly the sugar bounces back out. It gets rounded and sweeter than intended, so you push the acidity.”

Her intimate involvement with the winemaking side also became clear when she talked about the past two vintages, chilly and sometimes scary ones out Oregon way.

The late-breaking 2010 season was harrowing, she said, but “we had this beautiful long 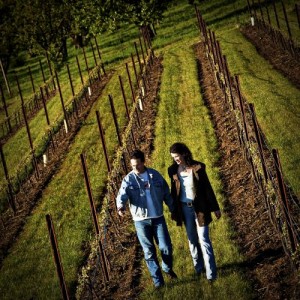 Indian summer. In 2011 it was not as much [an Indian summer]. We really sweated bullets but had faith because of 2010.

“As it turned out, 2011 was just a beautiful year for whites; acidity is the hallmark, but there still is fruit to be had. We did some things to add viscosity back, so it has that nice roundness to it.”

The Shulls (left) also are growing more of their own grapes, with 18 acres at their property, almost all to pinot noir and pinot gris, but one devoted to that non-Oregon staple, gruner veltliner. “We are so excited about the gruner,” she said.

Clearly, I wasn’t the only geek at the table.