For a guy who looks more like a “regular guy” than any winemaker I’ve met, Dave Ready Jr. sure loves his literary devices, those metaphors, similes and allusions. 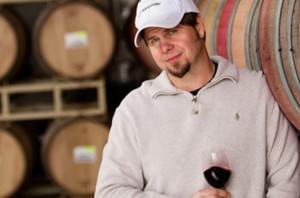 Many of his Murphy-Goode labels evoke poker terms, including his “All In” Claret and “Dealer’s Choice” cabernet sauvignon. And when he talks about those red wines, red-meat references inevitably pop up. The claret is “like filet mignon in style. You don’t need a lot of fat to cut through it.  The cab “is a little more like a bone-in ribeye. It’s not a hard cab. 

But Ready’s real passion, beyond five-card draw, dry-aged steaks and even his beloved Minnesota Vikings, is making tasty wine, year in and year out.

The secret: “I make wines I want to drink.  Good thing he’s got a great palate :o, but of course there’s more to it than that. Ready combines some strongly held views on what wine should be with an ardent desire to find out how it can be made better.

“I can’t add flavor,” he said over lunch while visiting his native Twin Cities, “but one of the things I’ve always worked on is managing tannins. Mouthfeel is very important to me. Managing the tannins means you don’t have to do fining. We use to always fine, and now I don’t have to.

“With style changes I’ve always taken baby steps. With the chardonnay I started with 2-percent stainless steel (fermentation), and I liked it. The next year I went to 7 percent, then 15 percent, then 25 percent. It made a more balanced wine to my palate. 

The wine that might get the most attention is another white, a sauvignon blanc called “The

Fumé” (best I can tell, that’s not Texas Hold-‘Em vernacular).

“I don’t want the sauvignon blanc to be in that green category,” he said. “Sauvignon blanc is one of those grapes that you can control in the vineyard. 

Still, grapes grown in different regions provide different elements, he added. In his North Coast blend, “Mendocino has stone fruit, Alexander Valley is tropical, and Lake County brings minerality. It’s like a fruit salad. Sauvignon blanc might have the biggest flavor spectrum of anything. I really want the spectrum. 

In the end, he adds about 3-percent semillon, which he calls “all textural. I want it to feel good. I don’t want it to hurt. 

One alteration that also hasn’t hurt, Ready said, was becoming part of Jackson Family Wines. The late Jess Jackson’s outfit, which bought the winery in 2006 (Jess was still alive), has a reputation for going the laissez-faire route with the operations it purchases.

“It’s definitely not winemaking by committee,” Ready said. “No one says ‘hey, you should do this or that.’ We’ve been with them for six years, and never once have I been told, ‘hey could you tweak this?’ “

Instead, Ready has been doing his own tweaking, to (sorry!) good effect.