OK, time to exhale. The holidays are behind us, and it was a Norman Rockwell-worthy spell with family with some Bacchus-worthy gatherings in and out. A few non-gathering gleanings from this stretch:

• I’ve been hoping that the wine-on-tap movement would hit the Twin Cities in a big way, but so far there’s been only a 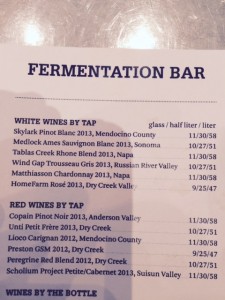 trickle. Shipping and recycling issues are being addressed, but not quickly enough. Out in California, no such problems are slowing this trend, as evidence by this fabuloso list (at left) from the terrific cafe at the Shed in Healdsburg.

• It seems pretty certain that wine, especially of the rouge ilk, is good for us in moderate doses. I took a pretty thorough look last year, but to that point the actual benefits of the compound called resveratrol were being debated because most tests had used ginormous doses. Well, there is now some very encouraging news from a study using much smaller amounts of resveratrol.

• My favorite new daily time suck is a morning missive from a site called Delancey Place, passing along excerpts from current books. A recent one from Laurel Braitman’s “Animal Madness” contained this snippet from a passage on the proliferation of bears 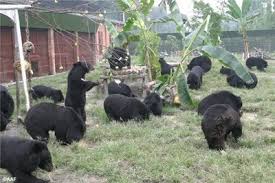 in what is now Wine Country, starring the namesake of Yountville: “When the trapper George Yount arrived in California in 1831 and settled in Napa Valley, he said that the bears ‘were everywhere — upon the plains, in the valleys and on — the mountains, venturing even within the camping-grounds, so that I have often killed as many as five or six in one day, and it was not unusual to see fifty or sixty within twenty-four hours.’ ”

• In today’s Yountville, the buzz has been about a major heist at the French Laundry. The thieves rightly targeted DRC treasures but also focused on Screaming Eagle cabernet. I’d probably have stuck with Burgundy and the other killer B’s: Bordeaux, Barolo and Barbaresco. The restaurant is closed for kitchen renovations; no word on whether the insurance money will go to that or to purchasing more rare wines. Or whether the insurers paid the going gray-market rate or the Laundry’s gouge-eriffic prices.