One of the cool things about my gig is getting to talk to great vintners, and I thoroughly enjoyed interviewing Jeff Runquist for a Star Tribune profile. And as per usual, I had more material than would fit into the confines of the story. 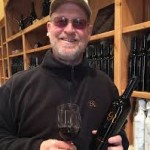 On a holiday revelation: “One Thanksgiving dinner, Dad had two carafes, and we all asked dad what he was doing, and he said ‘I’m not gonna tell you till the end of the meal. So at the end he said ‘what do you think?’ And carafe A still has some wine in it and there’s some in our glasses, too, and carafe B is long gone. He said [carafe B is] a Ridge Little Town Zinfandel.. We asked about wine A, which was pretty hard and tannic. He said that’s a Robert Parker 100-point wine, the 1975 Mission Haut Brion. And from that point on, my stylistic bent was to make a wine that I want to drink, softer, less astringent,.”

On his classmates at Cal-Davis: “In the first quarter I took Intro to Winemaking, and sat next to Heidi Peterson. And she introduced me to Michael Martini. And Joel Aiken and Dave Pirio were on our dorm floor. Dave Ramey was a grad student

while I was there. Oh, and the professors got really tired of Randall Grahm [left] asking questions about pinot noir.”

On how he found libations in those college days: “Davis at the time was a dry city, so we had to go three miles out of town to buy wine. And sure enough three miles and one inch out, there were two stores.”

On whether he liked to play in the dirt as a kid: “As a young man you always like playing in the dirt. But I was in an upper-middle-class bedroom community, and the dirt I played in was behind home plate as a catcher.”

On making wine from lesser-known (in California) grapes: “It’s like the resurgence of heirloom tomatoes. So much of that is 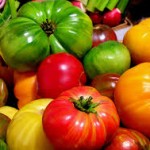 driven by economics and not just how delicious it is; for a long while we didn’t know because it had been taken over by Beefsteak and Early Girl.”

On the oft-repeated phrase that “wine is made in the vineyard”: “I think if you’re looking at the very upper echelon, at the very apex, that’s probably more true than for the majority of wines. You need to have good grapes to make good wine. But you give the same grapes to half-dozen winemakers, and you’re going to get a half-dozen wines of varying styles.”