Sorry for yet another “Sideways” reference in the headline, but I have merlot on the brain, having written about Washington’s swell array of it in this week’s Liquid Assets column. 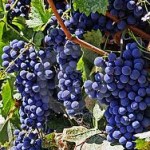 I mentioned in a recent post that some folks react to the mere mention of the word “merlot” as if someone had farted. The half-full-glass side of me says that’s just fine, since it leaves more of this wonderful varietal for the rest of us.

And there will be plenty of good stuff, and less plonk. Peter Mondavi Jr., whose Charles Krug winery makes a killer merlot for $24, told me a couple of weeks ago that merlot was “on its way down before ‘Sideways’ ” came out in 2005.

Basically, merlot had become so popular that for many rapacious vintners it stopped being a wine and became a commodity, and was waaaay overplanted. (In 1960, by the way, there were 8 acres of merlot in California.)

Duckhorn winemaker Bill Nancarrow said the movie actually was a good thing for California merlot. “We benefited,” he said. “The weaker merlots have been culled out, because people growing it couldn’t find anyone to buy the fruit.”

Yet another Napa vintner, Schweiger winemaker Andy Schweiger (left), agreed, but from a consumer angle: “All the bad merlot drinkers become bad pinot-noir drinkers, and then they realize that for the price of bad pinot noir they can drink good merlot,” he said two years ago. “One magazine recently did a whole article on merlot and they really nailed it on the head. And that is that merlot, like all varietals, needs to be grown in the right region.

“And if you force a grape to grow where it’s not acclimated to, you’re going to have inconsistencies or shortcomings, whether it be an empty mouthfeel or not enough fruit component. So now you’ve got to blend in other grapes or just make a lower-quality merlot. And so it’s no longer representative of a merlot; it’s just a red wine.”

So the weaklings have largely been weeded out, and most of the merlot on today’s market has to be good to survive. Still, California merlots, while stellar at the higher price points, aren’t yet as reliable overall as their counterparts from Washington, where the grape never was overplanted.

In the next few years, Washington merlot should do even better in the marketplace thanks to Mother Nature, said Ray Zemke, wine buyer of the Twin Cities’ Cellars chain.

“I think with the very troublesome 2010 and problematic 2011 vintages from Napa and Sonoma, Washington merlot has a great opportunity to win over many fine-wine buyers,” especially in the $10-$40 range.”