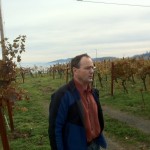 I had almost as much fun writing about David Gates as I did visiting with him at Ridge Vineyards. And as always when I’ve spent extensive time with a wine figure, a lot of good stuff got left out of the ensuing profile.

First off, I resisted the extremely strong urge to make a joke or two about Bread, the 1970s soft-pop band fronted by another dude named David Gates. Baby I’m-a want to do that, but I figured that it would go over a lot of readers’ heads and the rest of ’em would wad up their Taste section and heave it into the nearest circular file.

I also left out his affiliation with perhaps my favorite wine organization anywhere, the Historic Vineyard Society. This nonprofit is dedicated to spreading the word on the importance of keeping California’s oldest vineyards going. 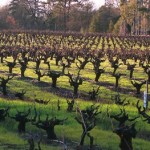 These guys are tracking down and compiling a directory of vineyards that were planted before 1961 with at least a third of the current vines traceable to that era. The vines at left are from Carlisle Vineyard.

If someone’s got a more worthwhile cause (charity aside) for wine people to pursure, I’d love to hear about it.