I am an idiot.

On our first California winery visit in 2000, my way better half and I tasted wonderful 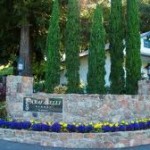 zinfandel and cabernet, sandwiched around just-right dark chocolate, at A. Rafanelli in the Dry Creek Valley. In the late ’80s Rafanelli zin had provided one of those “ah, so this is wine” moments for me, so I especially enjoyed tasting it at the source.

We bought the maximum allotment of zin that day, and I got on the mailing list. For the last decade, I have been ordering an average of a case of Rafanelli zin annually, usually mixing in one bottle of cab, which I inevitably cellared and forgot about.

Last December at my Nashville friend Albie’s house, seven of us enjoyed a dozen or more wines over dinner, culminating in dancing our lives away to “Gimme Shelter,” the women on their feet and a couple of us hefty men in our chairs.

But I digress. The evening’s bottles had included really good stuff from Barolo, Bordeaux, Burgundy and Priorat. But the wine of the night was Albie’s 2003 Rafanelli cab, vibrant and earthy and endless.

Upon returning to the Twin Cities, I checked the cellar and found that I had not only one bottle of the ’03 but a half-dozen other vintage dating to 1999. 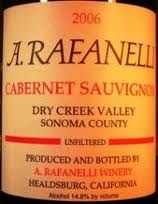 I opened the ’03 at a January dinner party, and it was every bit the delight that Albie’s bottle had been. Last night, we tried the “˜01, and it still had enough structure and depth, but it made me put the ’99 and ’00 on my IMS (Imbibe Me Soon) list.

Point is, I had been so homed in on Rafanelli’s zin that I treated the cab as an afterthought, even though it had been every bit as impressive on the winery visit. So I haven’t been buying nearly enough of it.

I won’t make that mistake again.

Oh, and I’m feeling a lot better about another Rafanelli purchase. Our granddaughter Zuzu was born in 2003, and we vowed to put together a mixed case from her birth year to be consumed when she turned 18 (which is what the legal drinking age should be).

Little did we know that 2003 would prove to be the worst year in memory for almost all regions that produce age-worthy wines, thanks to deadly heat across Europe and generally crummy conditions on these shores.

But we bit the bullet and plunked down $90 for Rafanelli’s Terrace Select, a Bordeaux blend that wasn’t released until 2008. After being wowed the “regular” bottling from that year, I’m feeling pretty good about the Terrace Select’s potential 10 years from now.