What I didn’t expect was that one of the very best wines would be made across the street from our hotel. Or that a reasonably priced wine bar would be perched above one of the toniest piazzas in Europe.

One of the trip’s highlights was a lunch on a perfect day next to railing overlooking a “dragon’s gulch,” fantastic old and new edifices hugging the opposite hillside and the multihued Mediterranean 800 feet below. It was like a scene out of a movie (this photo from amalficoast.com, as swell as it is, doesn’t do the scenery justice), and when our waiter recommended one falanghina-biancolello blend over another, we pounced.

And we were not disappointed. Clean and crisp, lush and lively, it was the embodiment of this region of otherworldly beauty.

But once the sun-dappled meal at Ravello’s Villa Maria was behind us, we had a natural skepticism that the wine couldn’t be as wonderful as it had been at one of those unforgettable meals in the perfect setting. We found and bought some, and it was 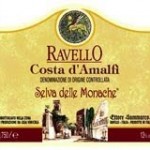 sublime. And then we figured out that the winery, Ettore Sammarco, was across the street from our hotel.

So of course we went there and inquired about sending a case home. Unfortunately, the shipping cost was $110, almost as much as the wine. so we settled for two bottles to sip on our patio perched about the sea.

We already had tried a nice falanghina, and a fiano and a greco, at a sweet little wine bar in an unlikely spot: next to the clock tower right above the tony town square in Capri. We enjoyed half-bottles for about the same price as the New York Time at the newsstand below the Pulalli Wine Bar. The food was dandy, too.

And the view, while not as bucolic as other locales on this jewel of an island, was still pretty on-top-of-the-world cool. Again, a cinematic setting.

But our favorite wine bar was in Rome. Our friend Annette had told us about Cul de Sac, a couple of blocks east of Piazza Navona, and if anything she undersold it. Our first visit found us on the patio, in front of a quiet (for central Rome) piazza on a perfect night. The wines, particularly a L’Olivetta Cesanese, were fantabulous. And reasonably priced: Even 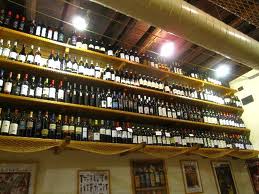 the spectacular cesanese, my first sampling of this red varietal, was just under $8 by the glass. The salumi and cheeses (old Piave!) were wonderful as well.

On our second visit we sat inside, underneath netting that prevent wines being fetched from the ceiling-high shelves to conk us in the head. On both nights it was a festive crowd of mostly Italians. But no one was more festive that my way better half and me, savoring every last minute on those and a dozen other nights in bella Italia.