Mark Vlossak is whip-smart and quip-prone. He’s incisive and insightful. So when the conconter of all those delicious St. Innocent whites and pinot noirs opens up, a writer is best off getting out of the way.

We had a wonderful lunch together recently, and here’s just a bit of the wisdom the Wisconsin native imparted: 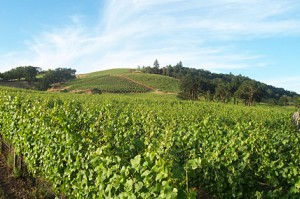 Springs had the most longevity aging. I was wrong; it’s Shea, clearly. “¦ The soil at Momtazi [left] is the epitome of “˜too shitty.’ “

On Oregon chardonnay: “For a while it was ABC [Anything But Chardonnay] in Oregon, but now we’re returning to Old World values. More people are being a lot more careful about what they’re eating, more fish and more birds and more pork, and chardonnay that’s balanced and has finesse, rather than a 2-by-4 slathered with butter, works there. The quality of the people making chardonnay is very high. “¦

“The expectation in the beginning was that we should make Burgundian pinot noir and chardonnay. But we got burned on [chardonnay] plant material. So you put it out of your mind, that’s it. We’ve had to redefine what we should do with chardonnay. We’ve collectively spent a lot of energy on, “˜what can we learn about chardonnay? How can we make Oregon chardonnay that’s as distinct and different from California’s as our pinot noir is?’ Diversity is very important; that complexity builds from the ground up, so I’m going with three clones and two rootstocks. And all old barrels, not stainless [steel] because I want less contact and external balance. 

On other white grapes in Oregon: “The volume story has been pinot gris. It’s a wine that’s grown for economic reasons. It’s easy to grow. People like it. “¦ Pinot blanc ripens later than everything else. For 10 straight years I was the only person growing it “¦ We’re gonna plant some riesling at 800 feet at Temperance [Hill Vineyard] in a really open, windswept spot. We wanna try to make some Mosel-style riesling. 

On cooperation among vintners: “Willamette is a great place to grow grapes. We are 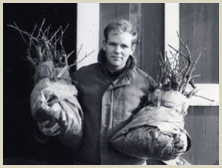 incredibly fortunate that [Eyrie’s] David Lett [at left, back in the day] drove his station wagon up the valley and found this place. There’s no question it’s the holy grail for pinot noir. The real question is, have we figured it out? The answer is absolutely not. But have we asked the right questions and done the most research? I would say yes, more than any other place in the world. Cooperation, that is the huge strength of Oregon. “¦ The base of information has broadened absolutely tremendously in the last 40 years. So we’ll be asking each other, “˜Is it really better to have one cluster per shoot?’ or “˜Is this clone and this rootstock best for this spot?’ “

On the 2012 vintage for pinot noir: “My impression is that in 2008, if you didn’t make great wine, you need to find something else to do. Now, 2012 I’m not sure the quality was as ubiquitous, but the smart people made really, really good wine. At fermentation and pressing, the wines usually are not very impressive, but these were fabulous.

“There’s also a difference in that 2012 is a textural thing, not exactly richness but breadth in the midpalate. I don’t think people buy wine because it tastes like cherries but because of texture. These wines are incredibly rich and incredibly beautiful and incredibly terroir-specific. It’s probably the best Momtazi I’ve ever made, just insane. 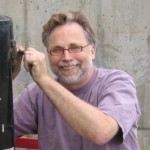 “It’s foolhardy to proselytize but I’m excited. We’ve spent a lot of years working to keep people interested and spending their small amount of disposable income. With 2012 they’re just gonna buy the shit. 

On other vintages: “The 2007s now are eccentric and really interesting. “¦ 2010 was the coldest vintage in 30 years. 2011 was the latest vintage I’ve ever seen. We were picking pinot blanc in November. Other than those two years, every vintage in this century has been warmer than the 30-year average. You can’t say “˜I’m never gonna grow syrah and cabernet in the Willamette Valley. They’re not ever going to get ripe.’ “

On his previous hopes of making nebbiolo in New Zealand: “It’s not happening. Our friends over there moved back to the States. That’s probably a good thing because it was kind of a whack job. 