It’s beginning to feel a lot like Christmas. But Monday night was, well, just a Monday night (does anyone still call Dec. 23 Christmas Adam [before Eve, get it?], or was that a juvenile thing?)

Anyway, it brought up a bit of a philosophical quandary: Should one open the last bottle 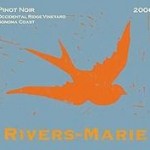 of a beloved wine on a Monday? The wine in question was a 2009 Rivers Marie Occidental Ridge Pinot Noir, and as splendiferous as it is, I’m not the type to go to the gray market to find more, so this was it.

A secondary question was answered quite starkly: whether the wine was too young to “finish off.” This was a beauty of a pinot, both fresh and laden with structure. I’m not smart enough to know whether it can get any better, but it’s hard to imagine that it will.

Having it alongside the 2004 rendition of perhaps Williams-Selyem’s top pinot, Westside Road, made me feel smarter. The wine was tasty but clearly headed down the other side of the plateau. It made me happy that I had finished my 2006 and ’07 Williams-Selyems during the last 15 months.

I’ve seen very little evidence that even the best California pinots get better once they’re six or seven years old. Oregon, yes in some cases. Burgundy, certainly. I hope someone brings an older California pinot along at some future gathering(s), but it won’t be me. Even Rivers Marie, my favorite from the Golden State.

The first question actually was answered even earlier, when our host, Brian, launched the 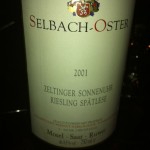 I saved an ounce or so for the crab-leg appetizer that Joe brought, and was rewarded. And I can absolutely vouch for the heavenliness of good pinot noir with the Julia Child coq au vin that Brian masterfully prepared.

But most of all, I can vouchsafe that great, last-of-their-ilk wines are not wasted on a Monday night. Especially when fantastic friends, never mind their own formidable contributions, are involved.