It’s been an amazing week of treasuring good friends and great wines. Last night the revelry continued with a lamb dinner at my friend Lonny’s house, where I had a revelation of sorts.

Most of the guests are part of a wine group that leans strongly in a Francophile direction. Throughout last week, they were sending emails about what they were bringing, two to three bottles per couple, and almost all of them were French and at 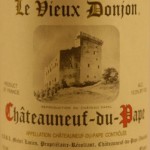 My cellar has only a few such wines, mostly Chateauneuf-du-Papes. And while I’m not vain or proud about such matters, I do not want to feel remotely embarrassed about not “stepping up to the plate” at these gatherings.

And then came the “a-ha” moment, as I thought: These friends became passionate about Bordeaux, Burgundy and the Rhone and delved deeply into learning about them, purchasing wines that they had heard or read about (from sources they trusted). And in more recent years, I have been doing exactly the same thing with California, researching and buying unusual, distinctive wines that writers such as Jon Bonné, Patrick Comiskey and David White and my Healdsburg merchant buddy, Perry Rankin of 34 North, had unearthed.

So I brought a couple of those, a Massican Sauvignon Blanc and Arnot-Roberts Clary Ranch Syrah, both of which I knew to be delicious and fascinating. And both 2011, a 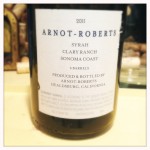 decade younger than the average bottle the others were proferring. And less expensive than almost every other bottle there, something I could not, uh, afford to worry about.

My theory/rationalization: Like them, I was sharing wines I loved, that I had searched out and that should prove a swell experience for anyone who loves wine. I hoped that they might provide “discovery” for my friends.

Mission accomplished. The old Rhones, Bordeaux and Champagnes were an uneven lot, many quite enchanting, a few fantastic, but most were more interesting than delicious or profound. And as my fellow cork dorks dissected the two Vieux-Donjons and other vintage bottles, from time to time I would hear someone at another table say “Who brought the Arnot-Roberts?” or “Is there any more of that Massican?”

So I did either the best I could or what I do best, and it apparently was plenty good enough.