This is a great time to be not only drinking but reading about hearty red wines from California.

It was a delight to see a young winemaker on the cover of the latest Wine Spectator, especially since it is Saxum’s Justin Smith (left), whose lusty, ultra-expressive wines I adore. Several articles cover California’s success with Rhone varietals (never mind all those wineries that have stopped making syrah because no one would purchase buy it; as Homer Simpson would say, “stupid buying public!”).

Oh, and one gigantic snafu: James Laube’s front-of-the-book column “Knights’ Day is Coming,” a paean to the Knights Valley region, landed three pages after a two-page ad for Beringer’s Knights Valley cab, with most of the type devoted to that AVA. Laube also praised the wine in his column (and not without reason; it is consistently a great value).

Now I’m not claiming that anything untoward went down here. But given past assertions that the glossy wine mags provide favorable coverage for major advertisers, and given that appearance is almost everything, I am saying this:

If I were editor or publisher of this magazine, I certainly wouldn’t have allowed the ad and column to be in such close proximity, and I almost certainly would have asked Mr. Laube to sit on his Knights Valley piece and file another column.

Back to syrah, briefly: The latest issue of Wine & Spirits includes a fabulous story on some more of my favorite winemakers who are fashioning fascinating cool-weather renditions of the varietal. The wines crafted by Pax Mahle (Wind Gap), Wells Guthrie (Copain) and Duncan Arnot Meyers and Nathan Lee Roberts (Arnot-Roberts) are well worth seeking out. 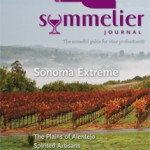 Those guys are sourcing a lot of their grapes in the humongo Sonoma Coast region, the focus of two pieces in the always-excellent Sommelier Journal, which is offering a free look at that issue.

It’s hard to believe while reading Randy Caparoso’s expansive look at Sonoma Coast’s many micro-regions that this is but the first of a two-part series. Terrific reading, and elsewhere in this issue editor David Vogels deftly encapsulates the wonders and frustration of this way-too-big AVA. Plus we get the ever-readable Jamie Goode on malolactic fermentation and up-close-and-semi-personal looks at the resurgent Soave region and Chile’s independent vintners.

There actually isn’t much about California in the March edition of the Wine Enthusiast, aside from some tasting notes and the inclusion of the Sierra Foothills in an article about “10 great undiscovered wine regions” (make mine Umbria!). This issue’s highlight is a dandy Cheat Sheet, on brands (wine and spirits) that consistently offer good value. Oddly enough, the only quibbles I have are with the selections from California (Fetzer? Kendall-Jackson? Really?).