I’m afraid I might be developing a man-crush. At the very least, I would love to spend some time wine-touring with Oz Clarke and James May. 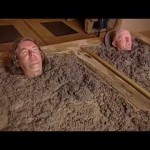 These two Brits are a hoot, with great chemistry burnishing their comedic chops. They’re willing to do almost anything, too, from trying “disgusting” garlic wine to drinking out of a spit bucket, from sabering bottles to shooting them, from mud baths (“My buzzards are on fire,” James [at left above] notes) to playing the “Maple Leaf Rag” on the piano at the posh Harlan Estates. 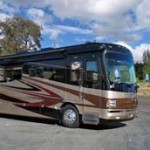 The longtime wine guru and the “Top Gear” star motor around the state in an outlandish RV, the “Wine-ebego,” and hold evening bacchanals therein, often concocting morning cures for their self-overserving. The ginormous vehicle encounters a few literal scrapes along the way, and a priceless scene shows them emptying the toilet residue into “the gates of Hades” at an RV camp.

But of course the adventures are mostly about wine, as they journey south to north, from Santa Barbara to Sonoma, visiting at least three wineries per episode. James plays the skeptic  — zinfandel “is something you drink for diarrhea,” he says; “Stop it, James,” Oz softly retorts — in search of good cheap wine. For Oz, it’s about the people as much as the juice.

And what an great array of people: personal favorites Randal Grahm, Gary Pisoni and John Williams 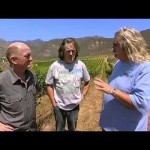 icons Jim Clendenen (left, on the right), Josh Jensen and Paul Draper, and could-they-be-more-different? Gina Gallo and Sean Thackrey in the same episode.

James might quip about “a bunch of hippies” at biodynamic pioneer Benziger, and both men might strive to avoid being the bigger “wine ponce [a delightful Brit word for sissy].” But they take the tasting quite seriously, trying to get at the bottom of what makes individual wines in particular and California wine in general so distinctive.

“In the end, we’re all wine ponces,” they agree at the end.

The two-disc set is not cheap: $32.98 at Amazon. My way better half graced me with this at Xmas (we like to ask for gifts that we normally would find too spendy for ourselves). And best I can tell, there’s no TV outlet for them, but it’s easy to find longish clips on YouTube. My recommendation: Find a friend or three and buy it, sharing the cost and the discs.