Like many of his Piemontese peers, Giuseppe Vajra comes bearing beautiful Barolos and bounteous barberas. Unlike virtually any of them, he also offers up riveting riesling and splendid pinot noir.

Yes, riesling and pinot noir from Piedmont, which speak to some spectacular terroir and a deft hand in the winery. But also to his family’s fiercely independent thinking coupled with a healthy (but not reverent) respect for tradition.

“I was 8 years old and had a friend whose dad was [renowned vintner] Giuseppe Rinaldi,” Vajra said over 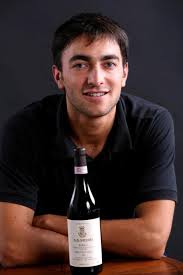 “So I asked my dad what he was. For me it was an identity crisis. We had a long talk, and for me the worst part was he refused to get to the point. He did every vintage better, and every vintage he was listening to the wines. We do love the fully traditional ways, and we do love the modern expression. So for me, winemaking is a crisis of identity.”

That crisis clearly is resolved by the time the exquisite G.D. Vajra wines are bottled. The Barolos are profound and persistent, the barberas (including a Superior bottling from vines planted in 1949) full of flavor and food-friendliness.

But wait, there’s more. The Dolcetto d’Alba is smooth and balanced. but packed with a lot more oomph than this varietal usually packs.

“Dolcetto is such a mistreated grape,” Vajra said. “I call it the ugly duckling. They say nebbiolo is king and barbera is queen and when it comes to dolcetto, they have run out of words. My father said ‘If you plant dolcetto in a nebbiolo vineyard, you will never make any money.’ And he was right. But there is not a day that we regret planting it.”

The same goes for those two outlying varietals. The Vajras were the first family to plant riesling in Piedmont, on the westernmost side of Barolo. But to them it made sense.

“My mom has a good explanation: ‘Riesling is a good wife for our Barolo.’ It is because they both have aging potential and strong personalities,” he said. “We feel a bit guilty that riesling is spreading in our region because we never wanted it to be popular. When I was a kid, I was hiding the bottles when we had German visitors.” 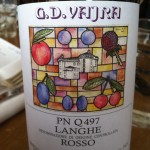 The pinot noir was “a wine of the rebellion for us,” Vajra said. “In 1999 we wanted to plant some nebbiolo at 900 meters. The government said to plant dolcetto. My father the rebel planted pinot noir.

And so it remains. With notes of cherry and licorice (but not cherry licorice, thank Yahweh), it’s clean at the outset and lushly soft on the finish, with just-right grip.

All of this fruit is estate-grown, and the Vajras are extra vigilant in those vineyards, with each hectare cared for by one person. “And you should see the adrenaline we have at harvest time,” Giuseppe said. “But if the grapes are ripe but not fully expressive, we will not pick them. And then we have a little technique. It’s all about sorting the fruit three times. Three tables: one for whole cluster, one to sort the berries and then the final sort.” The wines are bottled only under a full moon and in warm weather, he added.

Giuseppe is only the second generation of his family to make wine. And that only came about in a rather circuitous, thoroughly Italian fashion, as he tells it:

‘My dad was a cool city guy, flowing hair, hippie fashion. He was a hipster, we would say today. He was at a demonstration in 1968 and had the misfortune to run into his father, who had been in the service. No one in the family will disclose what happened that night, but at 4 a.m. he was driven back to Barolo.

“That summer he fell in love with that life. He said he wanted to be a farmer. It was a big scandal because the people of his generation all went to the city. My mother’s mom thought she was marrying a farmer from the hills.”

And so she was. And we wine lovers are all the more fortunate for it.