Sorry, Dos Equis, but “The Recommendeuer” is indubitably the most interesting man in the world. At least for grape nuts.

The Recommendeuer (a k a Greg Proops, best known as a quip flinger on “Whose Line is It Anyway?”), might not be as breezy-cool as the beer pitchman. But he’s infinitely more entertaining and edifying. Plus I really like the cut of his gib: plaid 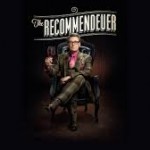 Billed as “a professional recommender and know-it-all expert on the Washington State wine industry,” the character is serious about wine but doesn’t take himself too seriously. Except when he does.

The Recommendeuer is willing to play straight man to Ricky the Raccoon but also able to delve deeply into appellations and grapes, geology and meteorology, viticulture and viniculture. I learned a lot, even though I already knew and loved the wonderful Washington wine scene.

And he’s on Twitter, but of course, (@recommendeuer), sometimes with a drolly written link to a wine map, often with a pithy bromide such as “After much research, I’ve discovered that wine, scientifically, is the actual ‘Chicken Soup for the Soul.’ Those books were dead wrong.”

It’s all part and parcel of a surprisingly — and refreshingly — edgy marketing campaign from the Washington State Wine Commission.

And now, what started as an iPad-only feature — full disclosure: The commission sent me a mini-iPad featuring the app — is available as a free app for mobile phones and for home viewing, via iTunes.

I’m not saying you’ll be converted into a Washington wine fanatic by the Recommendeuer’s wit and wisdom, but you’re likely to be more interested in the scene, and certain to be entertained along the way.