That’s the sound of a guy who averted semi-disaster earlier this week, at least on the viniferous front. I was supplying the wines for a dinner that people had paid good money to a charity for “” and realized en route that there would be barely enough to cover the crowd at a charity dinner: six bottles, and two from my friend Mark, for 10 people. 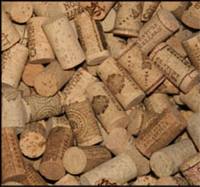 And none of them were corked. If even one had been, I would have had to order a bottle from the list to accompany our phenomenal meal at Cafe Levain. Their list is just fine, but the guests had paid to have wine from our cellars, mailing-list stuff that just isn’t available in the Twin Cities.

And given recent history, I feel fortunate that none of the eight bottles had cork taint or other flaws. It’s rare indeed in my circles to pull together more than 10 or so bottles that all come with corks and not have at least one of them be damaged. The prevailing estimate among folks I trust (including this one) is that about 8 percent of wines sealed with cork have some taint.

Sometimes the effects are egregious, moldy aromas and flavors that render a wine undrinkable. Sometimes the wine is slightly corked “” which is not an oxymoron a la “slightly engaged to be married” “” and the wine is “merely” not nearly as good as it should be.

Many consumers “” including yours truly, not possessed of a Sherlock Holmesian nose for minimal cork taint “” don’t detect the actual TCA, especially if it’s their first time sampling a particular wine. But in the last year, I have encountered bottles from Aubert and Saxum that, while quaffable, were nowhere near the usual high quality those wineries offer up.

Basically, a bit of TCA (2,4,6-trichloroanisole, in scientific parlance) had turned an $80 wine into an $8 wine.

Beyond a diminution of flavor, tainted wines can create awkward social situations (even for almost-impossible-to-embarrass folks like me). I recently had a restaurant dinner with a great winemaker; he ordered a wine, hurriedly sniffed and sipped and declared it OK. It wasn’t, and the shame is that he knew it once he started paying attention to the wine instead of talking and doing the restaurant “check” at the same time.

It’s time for this to end, and even wineries and restaurants are realizing it, as noted in this incisive, thorough article by Dan Berger. It’s time for those of us who bring wines to dinners and other gatherings to stop having to feel as though we need almost as much backup as a rookie cop at a drug lord’s villa.

For starters, anyone who encounters those moldy-basement elements should check in “” politely but firmly “” with the waitperson in a restaurant or the merchant if they bought it in a store. (Be sure to bring the bottle and cork, and don’t expect a refund if you’ve consumed most or all of what you bought :o). If you purchased a corked bottle from a winery, contact them, and again be polite “” unless and until they’re not.

The folks that get our money for wines that prove to be corked need not only to make good on it, but to know they have sold damaged goods. The good ones will absolutely want to know, and will deserve your return business.