A Ph.D in agricultural economics from the Universty of Minnesota can be used in a lot of ways. In Aldo Biondolillo’s case, the end result was the best malbec I’ve ever tasted, by far.

Biondolillo, whose family emigrated from Palermo, Sicily to Argentina a century ago, got his 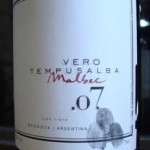 doctorate here 43 years ago. So it’s not surprising that he used a very academic approach to craft his Tempus Alba “Vero” Malbec.

Realizing that Argentina is “at risk of commoditization with malbec [and doesn’t] want to repeat the Australian experience with shiraz,” he embarked upon an elavorate clonal-selection program.

“We started with 8,000 malbec plants over 25 hectares,” he said over lunch in Minneapolis last week, “and with very strict screening got down to 589 plants, and then down to 16. We are now doing DNA testing for those 16.”

Along the way, Biondolillo & Co. (three sons and a nephew help with the winemaking) selected 10 very promising clones for the “Vero” wine. And thus did 5-year-old vines produce a profound red that stunned a group of fellow cork dorks a couple of weeks back. We drank it blind, and even the non-malbec fans in the group were knocked out by the wine’s depth and structure. Biondilillo and his fellow scientists are far from done. Besides sharing the promising clones with other Argentinian wineries — “we want a very huge expression of malbec with the same genetics but different terroirs” — the Tempus Alba white-coated brigade is experimenting with micro-oxygenation.

The winery is also doing more whole-cluster fermentation to offset malbec’s low-tannin predilection and using mostly French oak, and judiciously at that.

*Our wine style is to give high priority to the fruit and use oak just to express the fruit,” he said. “It’s a mixture of New World intensity and concentration but keeping the elegance of the Old World.”