The elbow poke to my ribs was actually gentle, meaning I had probably done what I set out to do.

The nudge was delivered by Chad Johnson, winemaker at Dusted Valley, at a panel discussion on wines from the Great Northwest. I had been mulling over what to say that was accurate and befitting a professional journalist, a role I play five days a week but also strive to maintain on this site, aside from a few f-bombs here and pointed retorts to commenters there.

The goal was sharing my ardor for Washington’s wines without coming off as a PR arm for the state. So: “I’m 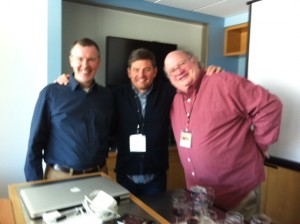 not here to say that Washington makes the best wines in the world, but the wines are world-class and the quality-to-price ratio is great at all levels.”

Later in the presentation, moderator Sean Sullivan (at left, with Chad in the middle) of the stellar Washington Wine Report posted statistics that expressed what I was trying to say much more clearly. A chart recounted the wines earning 90 or more points over four years (2009-12) by the Wine Spectator. Washington had not only the highest percentage of wines getting those scores (48 percent) but the lowest average bottle price ($43).

And neither race was particularly close, except for Washington’s neighbor, Oregon (43 percent earning 90+, average price $49). California and Italy had just 34 percent of their wines reach that height, and their average prices were $71 and $66, respectively.

And tasting Washington’s wines at three events over three days brought home the overall quality even more — even though I was focused mostly on stuff I haven’t tried and passing on a lot of wines I already knew to be great values. Among the highlights:

Riveting riesling: At a wine dinner at the fabulous restaurant Meritage, the first wines were rieslings. The 2008 and ’09 Chateaus Ste. Michelle “Eroica” were a little short of the acidity I like, but the ripe orange/tangerine flavors proved quite alluring. The 2012 Poet’s Leap Columbia Valley Riesling was a knockout, very firm and focused, with an energetic and near-endless finish. It ranked with a 2012 Smith-Madrone as my favorite domestic rieslings in recent years.

Not Laura Ashley: I kept on bollixing the name of the winery that I urged a raft of wholesalers to try at 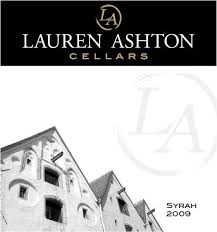 Monday’s trade tasting. It’s Lauren Ashton Cellars, no relation to the kinda-sorta-chic women’s clothier. A dentist named Kit Singh has brought his expertise in chemistry to this endeavor, crafting beautifully defined varietals and Rhône and Bordeaux blends. Every taste was thrilling. One of my favorite wholesalers thanked me profusely for the tip, which also was kinda thrilling.

Make mine merlot: Leonetti’s 2012 Walla Walla Merlot is nigh onto perfection: gorgeous fruit, just-right grip, lush but elegant mid-palate and finish. It’s not trying to be a cabernet, which some West Coast merlots are guilty of; it just wants to be the best that merlot can be. Mission accomplished.

Low prices, high value: Covington Cellars offered up a $15 cab that is a screamin’ bargain and a really nice $25 sangiovese. Cabernet sauvignon is now the most widely grown grape in the state, and sangiovese has a lot of people in the Evergreen State excited about its potential. These are swell entrees into what those grapes can do there.

Hello, old friend: I had splendid sips of Pacific Rim riesling, McKinley Springs chenin blanc and Northstar’s merlots, nice reaquaintances.  But I was seriously wowed by Gramercy Cellars’ two syrahs, the 2010 Lagniappe  and the 2011 Les Collines Vineyard, 2011 “The Third Man” Rhone blend plus the 2011 Phinny Hill cab. Priced from $48 to $55, they are super values — like so many of their Washington brethren.