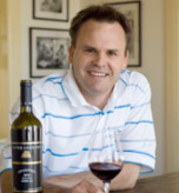 “People don’t associate elegance with Australia” might sound like a truism, but Ian Hongell is doing his best to make it not so.

Rather than prattle on about the subject, Hongell (left) made that simple statement and then had me sample his wines from Peter Lehmann of the Barossa.

I had tried, and thoroughly enjoyed, many of them from previous vintages, and the current releases were just as refreshing, expressive and well delineated as I had remembered. They had vitality and firmness and, in the cases of the 8 Songs and Stonewell shirazes, as much elegance as any Rhone syrahs I’ve experienced.

As Lehmann’s senior winemaker (second in charge), Hongell is part of a team that works with 150 (!) growers, almost entirely in the Barossa region. “It’s a huge commitment to spend time with every grower,” he said. “We tell them when to pick, and we’re managing that process on an hourly basis. We have to catch these things before they get too cooked. Anyone can boil a pot of water. 

That reference to the overly jammy, “cooked” style that was a prime reason Aussie wines’ popularity plummeted — “We’re running as far away from that category as we can,” he said ““ is part of a storyline that we’re hearing a lot from Down Under. “We like to play into the savory element rather than something that smacks you in the face,” Hongell added.

They do that by, well, geeking out a bit. “We spend a lot of time on the tasting bench with all these tubes and cylinders, doing a nutty professor kind of thing. 

That helps them produce delicious blends such as the “Layers” white, in which muscat, semillon (which Hongell calls the “great white grape of Barossa”), chardonnay, pinot gris, gewÃ¼rtztraminer and muscat all peek through at various stages. They also make a tasty botrytis semillon, which Hongell talks about here.

Another increasingly familiar Aussie talking point ““ and a seriously legitimate one ““ is a focus on regional traits. Hongell would dearly love for U.S. consumers to understand that there’s a big difference between the “richness and generosity without being powerful” nature of Barossa shiraz vs. generic Southeast Australia shiraz (a la Napa cab vs. California cab).

“Most Americans think Australia is a small island,'” he said, “but it takes as long to fly across the country as it does here. And you wouldn’t expect wine from the Finger Lakes to taste like wine from Paso Robles ““ and that’s before you even start on soils, climates, etc. 

Makes sense to me.