So a funny thing happened on the way to some gifted chef triumphing in the first (of what figure to be many) Joe’s Vadnais Heights Rib Cook-Offs. 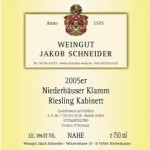 Schneider there, Y’Quem to cap the evening ““ there was a spirited debate (do wine enthusiasts have any other kind?) over TCA.

Actually, not TCA itself, but whether a wine, which happened to be one that I had brought, was carrying it. “The ’05 Carlisle is corked,” my buddy Mike declared in his inimitably cocksure fashion. (His proclamations are so strongly uttered that we have been known to deliver faux trumpet sounds in response.)

“Seems fine to me,” several of us said after sniffing and sipping the Gold Mine Ranch Zinfandel. And my friend Mark, who has the most attuned TCA-detecting nose of anyone I know, chimed in that he could not detect a flaw.

About a half-hour after we set aside that bottle to enjoy some other wines ““ “I’ve never seen anything like this,” my pal Jason said last night, and he elaborates and lists the wines here ““ Mark stood up and said “You know how much I hate to say this, but Mike is right. It does have TCA.”

Many of us again checked out the wine, and none of us found it defective. A bit deficient compared to the fresh, focused ’06 Carlisle Gold Mine Ranch Zin I also had brought, perhaps, but still a tasty, pleasurable wine. An open bottle often does start showing more TCA-ishness, but not in this case for the vast majority of this wine-loving crowd.

I have no doubt that there was a bit of TCA in this bottle ““ Mike and Mark know their stuff ““ but wines with just teen-einsy traces of it can and should be enjoyed by most folks. It’s the bigger doses, where the wine smells like my basement, that should make consumers wary and wineries worried.

Regardless, I’m glad I’m not that sensitive to TCA.

As for the cook-off, modesty prevents me from … oh please, I won, rather handily in fact, thanks in part to this sauce. All the other ribs were delicious, the wines were ridiculous, and the fellowship was outlandish (that’s Jason and yours truly below), so there definitely were no losers on this night. 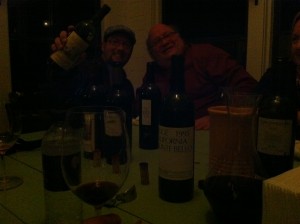