Some things I learned last week while visiting several wineries in Sonoma (hey, somebody’s gotta do it): 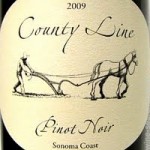 the “first labels.  I actually had observed this before, but was reminded of it when tasting County Line Sonoma Coast pinot noir, made by Radio Coteau’s Eric Sussman. Gorgeous red berry and savory elements and an elegant finish make this worth way more that its $25 tab. On my last trip to Wine Country, I had thoroughly enjoyed a pinot from Fogdog, the second label of Freestone. Both are first-rate bargains.

• That the reason you often see roses planted at the end of vineyard rows is not aesthetics. It turns out that rose bushes show the onset of mildew before grapevines do. So wineries use them as an early warning system so they can treat the vines. I still like the explanation allegedly offered by a tasting room wag: that the rose bushes indicate that those rows are turned into rosé.

• That two wineries with Minnesota connections have never made a wine that exceeded 14-percent alcohol. Jordan founder Tom Jordan got an economics degree at the University

of Minnesota, whole Duxoup founder/vintner Andy Cutter (left, with wife/partner Deb) grew up in Anoka. I also learned from Andy, whom I have profiled in my day job, that there is a character named Bill Ward carving out quite a reputation in Anoka County. “I’m pretty sure you two are not related, given how you talk,” said the ever-quipping Cutter.

• That my theory that winemakers might enjoy concocting appellation blends more than making single-vineyard wines is, not to put too fine a point on it, bogus (a common pitfall of my theories). Turns out that they’re serving as mixmasters just as much with the latter. Both Merry Edwards and Jeff Stewart of Hartford Court said they use different barrel and fermenting treatments, among other practices, within single vineyards, then make the best possible blend and put some of the rest in their appellation bottlings. In both cases, I’ll take the admixtures of “discards” any ol’ day.

• That “Sideways” was more a barometer than a driving force for pinot noir sales, according to longtime producer Edwards. “It was helpful primarily to Central Coast people, who needed it,” Edwards said. “But if you look at restaurant statistics, [the popularity spike] was there. The quality was increasing, and it’s easy to drink. ‘Sideways’ didn’t make it happen. It was happening.”