Jordan Vineyard & Winery doesn’t have a vineyard manager like most of its peers.

It has a ranch manager, one Brent Young. 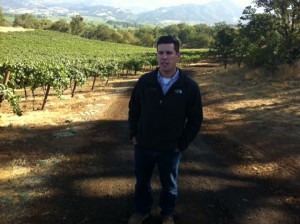 And in this case, the title is anything but an affectation. First, Young (left) looks the part, with his boyish mien and cowboyish physique (he shows cutting horses in his spare time). More than that, the sprawling Alexander Valley property really is a ranch, with a large organic vegetable/herb garden, 12 acres of olive trees and, yes, cows.

Young has been on board since 2009, focusing mightily on giving Jordan winemaker Rob Davis “a window to the soil.  There are at least eight distinct types of soil on the 112 acres under vine scattered around the nearly 1,200-acre estate. It’s not a reach to say that virtually every square inch of those vineyards has been examined by Young.

“We irrigate here,” he said, pointing to part of a row of petit verdot, “but not there,” pointing to another part of the same row. He often mixes up the cover crops, the amount of thinning and other practices within individual rows, truly and thoroughly microfarming.

Young has one foot in the 21st century: He uses GPS to monitor the vines, concocted an iPad app to keep track of soil moisture and vine stress and helped implement solar panels and sustainable practices throughout the ranch.

Jordan also harvests 100-percent mechanically because, Young said, “the machine is cleaner than humans. The knife’s gonna pick everything. The machine shakes the clusters and gets out the overripe or green grapes, or what the turkey ate. You can set the machine up so it only picks the stuff in the middle.  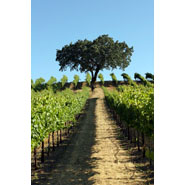 His other foot resides in practical, old-fashioned farming practices: Young nods at carefully pruned but broad oak trees amidst a vineyard and notes that “a lot of owls live there, and they get the voles.  He alternates berry plants among olive trees to attain “low pest pressure.  As a result of these practices, he said, Jordan has sprayed just once in the last five years.

During our early-September drive around the property, I was surprised to hear that Young was about to harvest most of the red grapes. That’s uncharacteristically early for Bordeaux-style grapes, but it fits with the flavor (and lower-alcohol) profile Davis desires.

“Cab and merlot, we like at lower brix,” Young said. “We want expressive fruit. Rob is really into early ripening, and he has isolated pockets in the AVA that are extremely early. 

Most of all, Young listens to his plants. “The leaf will tell you basically everything that’s going on with the vine. 

Somehow, I got the sense that those leaves are only confirming something this meticulous soul already pretty much knows.

(For some blog posts either written by Brent Young or looking at his practices, go here.)