So some friends and I were gathered the other night, drinking seriously tasty wine and eating an astonishing stew prepared by the estimable Ken Goff, when the talk turned to the 100-point wine-rating system and the ridiculousness thereof.

The one point of agreement was that there are 100-point wines. But being cork dorks of the highest order (somewhat literally at this point of the night), we differed on the parameters.

We yammered on about the importance of context, where and with whom the wine was consumed, and especially about the manner and degree to which the wine stirred our 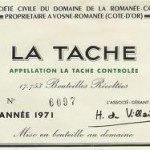 minds and souls. Someone regaled us with the tale of a well-known Minneapolitan shuffling across this very floor on his knees to rub his head against the thighs of a man who had shared a 1971 La TÃ¢che. (They did not, by all accounts, go home together.)

The general consensus was that perfect scores should be reserved for wines that evoke that kind of response, although the cheek-thigh thing is presumably optional. Basically, a wine can be profound, but unless its effect is also profound, it can aspire only to a 99.

Balderdash, I said (or maybe it was another word that began with “b”). I compared it to art, another area in which “perfection” is subjective even if we can agree on greatness.

I used my first trip to Paris’ Musee d’Orsay as an example. We toured the lower floor, gawking at amazing sculptures, frescoes, friezes and paintings. We headed to the second floor of the chronologically arranged museum, gawked some more and chuckled upon finding “Whistler’s Mother” among the collection.

And then we walked into the Van Gogh room. Startled by it all, I took a few halting steps to the center of the room for a full perspective. I soon realized that I was shaking, surrounded and utterly enveloped by these widely varying works of surpassing beauty. Tears welled up, and receded, and returned.

I am not a religious person, but I was certain that something not of this Earth was at work here, that Van Gogh had been a conduit for an otherworldly force.

These were, not to put too fine a point on it, a buttload of 100-point paintings in this room.

The day before, I had seen Monet’s glorious water lilies at the Orangerie. And even though those works did not move me as mightily or cosmically as the Van Goghs, I feel pretty secure in calling them 100-pointers, too.