I don’t know when I’ve had as much fun reading a book as I did with “The Billionaire’s Vinegar.” Of course, it didn’t hurt that I was paging my way through it in Paris and Burgundy, near where some of this fascinating saga originated.

But what a story, filled with action, intrigue and a cast of characters that would do Tom Wolfe proud, creating a page-turner that would do Dan Brown proud. If that sounds like a novel, it might be because so many of the figures are either implausible or larger than life. Or both. But they’re all real, even if (alleged) fraud is at the heart of the story. 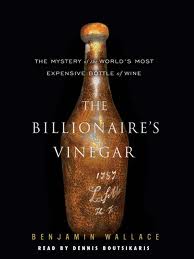 A, um, colorful character called Hardy Rodenstock enters the wine world with a splash, unearthing amazing juice that may or may not be what it appears. After he fetches $156,000 apiece for some bottles of 1780s Bordeaux that once purportedly belonged to an avid cork dork named Thomas Jefferson, suspicions arise.

With a great reporter’s knack, Wallace guides us through Jefferson’s 1787 European tour, Hardy’s Byzantine world of wine figures including Michael Broadbent and an investigation by one of the Ã¼ber-rich Koch brothers. With a great writer’s knack, he brings these figures, not to mention what could have been some drab science and social history, to vivid life.

Although what Wallace calls “the longest-running mystery in the modern wine world” was ostensibly settled in a 2006 lawsuits, this book raises provocative questions while entertaining and edifying us. (For starters, anyone who buys old wine after reading this caper might just have more dollars than sense.)

Will Smith has bought the rights to a film version, and it’s a safe bet that whoever ends up crafting a movie out of this won’t need to add any Hollywood flourishes or embellishments.