One of the things I’ve always really liked about wine aficionados is their other interests. They almost invariably love food and travel (a nice thread since grapes like to grow in beautiful places). They also tend to be well-read and have a particular ardor for history. 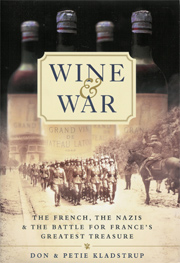 Which means “Wine & War” doubles the pleasure for many if not most wine enthusiasts. Thoroughly researched and deftly written, Don and Petie Kladstrup’s book is filled with wonderful anecdotes and no small amount of tension. The relationships between vintners and their regional overlords (weinfÃ¼hrers) were a combination of showdowns, tap dances and tightrope walks.

“Each man,” the authors write, “had an innate sense of how far they could push the other.”

Many farmers and winemakers “tried to live in the shadows,” as Loire grower Jean-Michel Chevreau put it, but others were called to fight (in the case of Alsatians, for Germany) or decided to take part in the Resistance.

Germany’s takeover of France and requisitioning of its crops and goods created shortages of everything but resistance to the notion that the Germans could commandeer the “France’s greatest treasure” of the book’s subtitle.

Amidst the subterfuge and sagas of now-famous families (Hugels and Huets, Drouhins and Rothschilds) are a raft of surprises. A POW wine dinner makes for a particularly poignant passage, as does the desire to make sure soldiers and the elderly get their wine.

“The old and ill need wine,” proclaims Leon Douarche, vice president of the French Winegrowers’ Association. “It’s an excellent food for them; it’s easily digested and a vital source of vitamins and minerals. It is the best elixir for guaranteeing a long life that has ever been invented.”  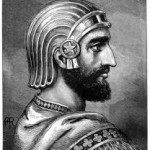 There’s much, much more, including some older history: In the 6th century B.C., Cyrus the Great (left) ordered his troops to drink wine as an antidote to infection and illness. In the end, this is a nonfiction narrative so compelling that it probably would have been a bestseller had it been released as a novel.

Not that wine lovers would care.