Now, with his power apparently on the wane, seems a particularly good time to peruse “The Emperor of Wine: The Rise of Robert M. Parker Jr. and the Reign of American Taste.  Elin McCoy’s masterful, authoritative biography really gets at what made Parker perhaps the most influential critic. In any genre. In the world. Ever. 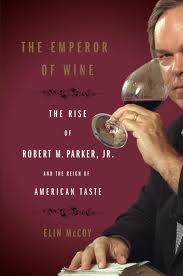 exposition of what the wine world was like at the time, she then traces how he evolved from a Ralph Nader-like iconoclast into a General Motors (or maybe E.F. Hutton) -like icon. How he pulled against the tide and made his bones assessing the 1982 Bordeaux vintage. How he pioneered the 100-point system (which is now basically a 20-point system in his Wine Advocate magazine).

This is hardly a hagiography. McCoy is no fan of the 100-point system, calling it “a joke in scientific terms” and lamenting the vinicultural pandering that countless wineries have undertaken to garner big scores, and the often-alarming price hikes that follow.

But she also paints an honest, vivid, in-depth picture of Parker the man, and she acknowledges that his outsized influence was due in part to the fact that many people just flat loved the wines that he touted.

This richly detailed account might not be suited for the wine novice, but it’s nigh onto a must-read for anyone who came into the wine world during Parker’s heyday or just wants to understand the unparalleled phenomenon that he became.