Mike Officer was in a hurry, a common mode for young winemakers. He had crammed us into a busy schedule, and even though we arrived a few minutes late at the Santa Rosa warehouse where he makes Carlisle wines, we beat him there.

Embarrassment averted, especially since our excuse, an extended lunch with another winemaker (David Ramey), was not likely to curry any favor whatsoever.

Carlisle has an almost cult-like following, but Officer has kept prices manageable; most of his zins and Rhone varietals and blends are in the $30s, a few petites in the $40s. This is a great mailing list for an enthusiast at the intermediate level — or beyond.

The wines are hearty, with big tannins and fruit and plenty of structure for aging. They’re also seriously terroir-driven. Officer, who as a software engineer was making such great wine in his garage that friends insisted he start the winery, has sought out spots, mostly in Sonpoma and the paso Robles area, that are known for great fruit.

He’s also discovered some dandy sites himself. The Carlisle Two Acres is a true field blend; it took a good bit of testing to determine what the grapes are in its eponymous vineyard 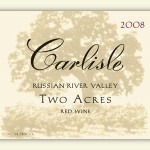 Anyway, we didn’t have much time for chit-chat during our visit, and Officer is not a gregarious sort anyway, safe for the occasional “big wines are panty melters” quip. But as we quickly tasted close to a dozen barrel samples, he did share some thoughts:

“Purity is something we strive for. We want the fruit to be very crystalline.”

“I have a pretty agnostic palate, as long as there’s no brett. I’m hyper-sensitive to flaws, brett and ethyl acitate.”

“At the start of harvest we’re doing a lot of sampling, pH, TA. After a couple of weeks we get touchy-feely. Toward the end there are a lot of discussions based on what I see and taste.”

“I used to put a lot of stock in aroma, and then not enough.”

“I don’t like the flavor or aroma of oak. It’s like overseasoning food with salt. We ask the coopers not to overseason our barrels. But sometimes a heavy toast rounds out the flavors. If you have a wine that has that texture and put it alongside wines that don’t, you go ‘ah.’ “