The theme on Saturday was Italy, early and often. I spent the morning sampling a buttload of Tuscan wines and the evening with some fellow cork dorks at an Italian wine dinner (with a major nap in between).

Both were fascinating exercises, with a few dandy discoveries and a revelation of sorts. And a whole new approach to sampling. 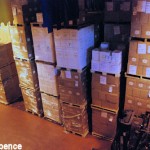 I get several cases of samples a month, more in the spring and fall, less (meaning 3-4 cases a month) in summer and winter. My M.O. had been to go at six to 12 bottles in the evening, a couple of times a week. But the combination of a hard day’s work and the sampling (more chore-laden than you might think) often leaves me spent, kinda fried for the rest of the night.

I had noticed while judging at competitions that my palate was sharper in the morning, and had often worked through 60 wines in a morning (and remained standing). Voila: I’m now going to spend two weekend days a month sampling 25 or more wines in the morning and leave time for a nap, and my weeknights will be decidedly more enjoyable.

Saturday was Round 1, starting with 17 wines from Tuscany, followed by four from Veneto and six sundry whites. There were a few standouts, including a reigning Wine of the Week, but more noteworthy was that there were no clunkers.

Tuscan reds from Tenuta Di Arceno, Badia a Coltibuono, Banfi, Da Vinci and Piccini were all solid efforts, and there were some great values: 2011 Cecchi “Natio” Chianti and Bibi Graetz “Casamatta” and the 2010 Selvapiana Chianti Rufina Vendamia. 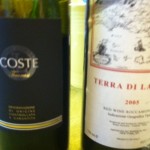 Then at my friend Reid’s house, reds from all over Italy generally delighted us, but few thrilled us. The first flight was a pair of fascinating and flavorful aglianicos (left), from Coste and Terra di Lavoro. After subsequent Brunellos, Barbarescos and Barolos, my friend Ken proved his usual incisive self with this assessment: “We had the aglianicos, and then it didn’t go uphill from there.”

My favorite Italian red probably was the Il Caberlot blend, but my wine of the night actually was a riesling from G.D. Vajra, a scintillating, bracing glassful of purity and depth.

Having a lot of really good wines in a variety of styles (Old and New World, rustic and spoofulated) was rewarding but hard to synopsize. It all got me to thinking about my late-1970s years in Italy, when store-bought wines were almost universally crappy, but also about baseball prospects.

I’ve always loved following the up-and-coming players, from can’t-miss sorts like Byron Buxton to the promising but imperfect sorts. Some of my favorite writes in recent years have taken to assessing these prospects in terms not only of their ultimate potential but also the worst-case (non-injury-related) scenario. The terms they use: “ceiling” and “floor.”

So there you have it in terms of Italian reds circa 2013: The ceiling remains 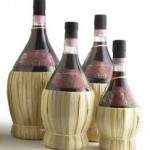 lofty, but the floor is much higher than ever. That reflects my experiences not only yesterday but in recent years. The reliability factor is strong.

And that’s saying something, especially for those of us who slogged through years of plonkish Chianti in bottles with those straw-covered bottoms that bear an insanely appropriate name: fiascos.