The California wine industry owes a lot to George M. Taber. His semi-reluctant decision to attend an obscure U.S. vs. France wine throwdown is the only reason California’s triumph ““ winning both the cabernet and chardonnay divisions ““ got any media attention. He was the only journalist there, and his short account in Time magazine reverberated through the wine world and gave a fledgling wine industry an immeasurable boost.

It took Taber three decades to turn this now-renowned event into a book, and the 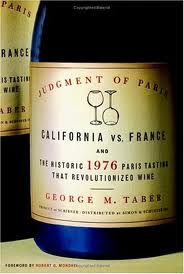 wait was worth it. “Judgment of Paris: California vs. France and the Historic 1976 Paris Tasting That Revolutionized Wine” ($16, Scribner, 352 pages) is a fabulous read for both wine and history buffs.

The account of the event itself ““ in which an all-French panel judged Chateau Montelena chardonnay and Stag’s Leap Wine Cellar’s cabernet better than the best of Burgundy and Bordeaux ““ is seriously tasty. But as with all things wine, the back stories prove every bit as fascinating.

Taber focuses extensively on the people behind the wines, Montelena’s Mike Grgich and Jim Barrett and Stag’s Leap’s Warren Winiarski, and his research and reporting skills bring these profiles to vivid life. He then unearths details around the tasting ““ some judges were giving the highest scores to the wines they thought tasted “most French” ““ and spends the last third of the book on the aftermath.

And boy was there as aftermath. Certainly the California wine industry would have grown mightily in the ensuing years regardless, but only an ostrich would claim that Taber’s work had nothing to do with that. Indeed, the entire globalization of wine could be said to have started on that fateful day in Paris.