Sometimes you can tell a book by its cover, or at least its title. Case in point: Natalie MacLean’s “Red, White and Drunk All Over,” which is as charming and disarming as one would expect from a book thusly named. 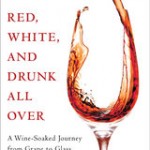 Deftly juggling interviews with winemakers, merchants and writers with sensuous sojourns to Burgundy, MacLean makes her wine journey personal but not overly about herself. The result is a work with broad appeal, as she neither writes down to novices nor up to experts, thanks to a sparkling wit and “don’t-take-this-too-seriously” approach.

“I’d love to say that I was born with an uncanny palate, but I was just born thirsty,” she writes, later noting, “Much as I’m drawn to its nuances, I wouldn’t be writing about wine if it weren’t for the buzz. I love the way a glass of wine makes me feel — invigorated and animated, released from my natural shyness.”

Here’s what I wrote in the Star Tribune upon the book’s release:

“There’s a good bit of fodder for oenophiles — green harvesting, terroir talk, decanting dos and don’ts — but MacLean nimbly places those passages into a broader tableau. She is inexorably drawn to people who prefer to view wine as a pleasure rather than something to be deconstructed to death, who understand that “˜how a wine tastes is different every time you try it,’ depending on the mood, the food, the company and the evolution of the juice.

“With an uncommon dollop of common sense, she writes about how stocking a wine cellar is different from other collecting pursuits because it “˜is as much about letting go as it is about gathering in.’ And why a special wine with a great bouquet is an utterly unforgettable experience (“˜smells are routed directly to the areas of the brain responsible for emotions and memories’). And why tart wines are the most versatile at the dinner table (“˜acidity is the salt of wine; it brings forward the flavor of both the wine and food’). 

In short, she’s an engaging and entertaining tour guide on this wine journey that has grabbed a-hold of so many of us.