If there’s anything I love almost as much as wine, besides of course my WAY better half, it’s mysteries, especially of the British ilk. Inspectors Morse and Lewis, “Sherlock,” “Foyle’s War,” “Cracker,” Inspector Lynley, “Prime Suspect,” etc. They need to show some darkness but not be too gory or just hope-free (“Luther”), but mostly not too frothy (“Hetty Wainthrop,” a few iterations of Miss Marple).

So imagine my delight when I discovered “Blood on the Vine,” a series of 90-minute mysteries set in France’s vineyards and featuring a wine expert/critic as the initially reluctant hero. 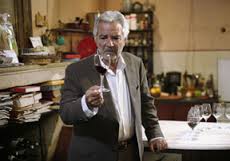 Turns out that Benjamin Lebel has a great nose for wine and a pretty darn good one for sleuthing, once he catches the bug.

That takes him to Champagne, Cognac country, Sauternes, the Loire and other vine- and blood-splashed landscapes; snippets of this would make a great travelogue. Murder is not always at the heart of the story, but uncovering who’s contaminating wine and why can be just as shadowy a scenario. Learning a little bit about wine is just a bonus of soaking in these smart and sophisticated sagas

Pierre Arditi inhabits the Lebel role with equal parts savoir-faire and edginess, grace and grit. His two sidekicks and a detective help unravel the cases, and these characters develop nicely as the series moseys along. There are two sets available now, each containing four 90-minute episodes.

With just enough shifty characters and unexpected turns and twists, “Blood on the Vine” is a compelling, often riveting offering. If it was a wine, it would be a Right Bank Bordeaux: full-bodied and lush yet light on its feet.