Erin Chave is everything one could want in an ambassador for a winery. She’s charming, whip-smart, whimsical, attractive in every way. So an evening that I expected would mostly showcase some great wines ended up with a co-star. 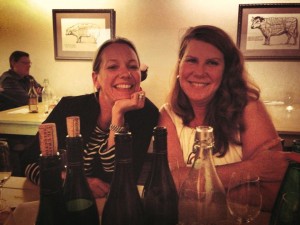 the nominal string ““ Erin (on the left, joined by Bourget Imports owner Annette Peters) is a St. Louis native who worked for the estimable importer Kermit Lynch, living in Beaune for several years (sigh) and meeting and wedding Jean-Louis XV.

Some highlights of a thoroughly delightful tasting/presentation at Sunfish Cellars with Erin:

• The outset of the vinification process finds Erin and others “doing the Lucille Ball thing,” personally stomping them grapes. “And I promise we clean our feet.”

• Like Minnesota’s landscape, Hermitage wines owe a lot of their distinctiveness to glaciers, which “came through and broke up the path along the [Rhone] river. So we have east exposure, south exposure and west exposure on the Hermitage side.” The glaciers “also 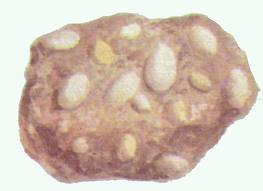 left a geological patchwork of soil on our side, seven different soil types … and a composite called puddingstone (left).”

• She calls the Domaine Chave Hermitage Blanc ($200) “big daddy” and “a pleasure pig, because it loves to be at the table.” And the 1991 vintage, her favorite, has another nickname: “I call it the ‘doghouse wine’ because every time Jean-Louis gets in trouble, a bottle of the ’91 suddenly appears.”

• In contrasting that wine with similarly priced juice from a nearby region, she said that “white Burgundy is all about the acidity; white Hermitage is all about mouthfeel and texture.” The ’08 that we sampled bore that out, but it’s about time to put that wine to bed, Chave said. It “can age forever, but it will always always always go through a pouty adolescent stage when it’s five to 15 years old.”

• Chave wines have been made since the 1400s. Not only is her family enamored with that legacy, but one aspect of their work has changed little in the intervening centuries. “Everything,” she said, “is done by hand or by horse.”

Except for that ambassador part, which is in eminently capable hands.