Put HdV’s Stéphane Vivier squarely in the “wine is made in the vineyard” column. That’s not surprising coming from a winemaker working with one of California’s foremost growers (Larry Hyde) and one of France’s finest vintners, Aubert de Villaine (who in his spare time oversees a little operation called Domaine de la Romanée-Conti).

Or from someone lucky enough to be plying his trade in Carneros’ Hyde Vineyard, which he calls “definitely premier cru headed toward grand cru. 

Vivier esepcially likes the consistent weather conditions in his swath of Wine Country. “You get fog, then that luminous, intense Napa Valley sun,” he said, “and at about 3:30 to 4, the cool winds from the Petaluma Gap and San Pablo Bay.” 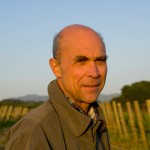 But HdV — bearing the initials of its two proprietors’ surnames (de Villaine is married to Hyde’s cousin Pamela) — is not built around a laissez-faire approach.

“A lot of people say we make wine with minimal intervention,” Vicier said. “But you need to intervene in the vineyard. We have to create that stress to get the best grapes possible. 

Part of that stress comes from dry-farming, the only winery using Hyde Vineyard grapes to do so, and in “letting the grapes stress,” Vivier said.

HdV does one extra bit of intervention of sorts in the winery. “We press chardonnay for five hours here, maybe more than anyone,” Vivier said. “Chardonnay is not about fruit. Chardonnay is about texture and grain. 

The chardonnay and a red Bordeaux blend were the first HdV wines, from the 2000 vintage; syrah and pinot noir have been added since.

And while it’s almost always folly to dub any California wines “Old World,” you can see France from there when consuming these wines. The French influence has come from one of the true masters, executed by a fellow Frenchman in Vivier.

“Aubert designed this so that we wouldn’t change our style,” Vivier said. “Now that the pendulum is swinging back to this style of wine “¦”