Mel Masters might be the only negotiant living in New Hampshire ““ which, after all, is called the Granite State and not the Grenache State. If there are others residing there, Masters is almost certainly the most accomplished, and definitely the most colorful.

And it actually makes geographical sense for home to be there, since New England is more or less equidistant from the two locales where he buys grapes and produces wine: Languedoc and Lodi. His job makes access to both places crucial.

“As a negotiant, I work with the growers, the winemaker, the vineyard manager,” he said. “I need to be able to have lunch with these people.  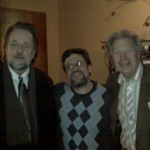 As we were enjoying lunch at Minneapolis’ Sea Change, it didn’t take long to recognize what an engaging “people person” Masters (far right) is. For a negotiant, relationship skills are more important than winemaking chops.

“I’m more a marketing guy than a winemaker,” he said. “My whole aim is styling the wines for the market, like the chef building and conceptualizing a new restaurant. 

So when asked to cite the most important part of his job, Masters quickly answered, “bonding with the people who sell my wine. 

For the last decade, that wine has been under the Tortoise Creek label, named after “these little terrapins” at a house he moved into near Aix-en-Provence in 1969, “back when it was a little village, like a cowtown, we would jokingly say. 

For a while, he and his wife Jamie were content to focus on Languedoc at Tortoise Creek, especially old-vine carignane. But three years ago, Mel decided that some of those wines “weren’t what the American palate was looking for,” so he looked west, as always for “artisinal winemakers and sustainable vineyards.

“When I was deciding where to go, I was looking at Paso Robles,” he said, “but then I ran into some people from Lodi. That’s the only appellation with third-party certification for sustainable. I think Lodi has immense potential. 

So now Tortoise Creek’s portfolio includes carignane and a bright, decidedly French “Les Oliviers” pinot noir from languedoc. And from Lodi, a smooth but taut “Jam’s Blend” (named for Jamie & Mel) chardonnay, a spicy but elegant “Chelonium” zinfandel and a Cherokee Lane Lodi cabernet with just-right intensity, grip and fruit. Plus a sauv blanc and (soon) a viognier, all priced at around $12.

Over the years, Masters has marveled at the “phenomenal degree of improvement in technology. Even in a shitty vineyard you can get good wine.  He has been pained by his beloved old vines being pulled up en masses in Languedoc. “Carignane has to be old. It’s a lot like us: The older we get, the better we are. 

He has evolved and adapted, but mostly he has paid close attention to what consumers want.

“Palates evolve,” Masters said, “but Americans’ are still very different from Europeans’. Americans have a sweet tooth. But you can look at the growth of rose’ here, and that tells me that there’s a general movement to a more sophisticated palate. 

Wherever our palates go, it’s a good bet that Mel Masters will be there.