The original premise of my article about beer geeks in Saturday’s paper was narrower, more along the lines of: Beer geeks vs. wine geeks, which are geekier?

So in the course of my reporting, I talked to a couple of friends who admit to having their toes in both worlds, and got some fascinating fodder that I wasn’t able to use in the article.

Great points, I think. The geekiest among us oenophiles care about the types of yeasts and know every pinot noir clone’s properties and history, but most are not the way our beer counterparts are about hops. But it’s close.

My friend Reid Plumbo thought that “beer geeks are a lot more interested in the brewing process than wine geeks are about the winemaking process. … Maybe it’s because homebrewing is so much more common than making one’s own wine.” 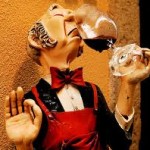 “You have your Barolo/Burg guys in wine, and they’re your Belgian beer drinkers. They’re really into ‘pure’ beer and tradition — Old World.

“Then you have the California/Rhone guys who love bolder, hoppier beers (this is me). This crowd enjoys newer styles and experimentation. New craft beers made in new ways appeal to this group.

“The Australian Shiraz drinkers would be your Stout and Porter drinkers. Think Surly Darkness. Subtlety is not a virtue; they want to be beaten with the oak paddle.

“Your box wine/Fetzer crowd is the Bud Light community. They drink it because it’s cold.”