My friend Bill Hooper is the kind of guy who can says stuff like “I feel totally and completely honored to have been able to play even the smallest role in the story of German wine” without a trace of irony. And you know there will be quips to follow.

Bill and his family have decamped to Germany, and his wine savvy is sorely missed in the twin Cities. Our loss is their gain, as Bill’s account from Bill on a season’s travails and triumphs surely shows:

“I’ve really come to appreciate certain aspects of Germany as I have come to miss many aspects of America”“and sometimes Germany and the Germans seem to be some strange caricature of some America gone wrong. It can be unsettling (There is, for fucksake, a Bon Jovi edition Volkswagen. WTF?! I think the dashboard is covered in faux ’80s rocker hair.)

“But the genuine culture and tradition, where it exists, is what interests me. I have been on a hillside vineyard in the cold of January, when the Polish workers that I work with all take a break and offer me a warm cup of tea, brewed fresh that morning. We don’t say anything; we just rest our tired backs for a few minutes sipping our tea and watching the snow cover the world as it has been done in German vineyards for almost two thousand years. Surely that almost makes up for German hip-hop. 

“This week saw the end of another harvest in the Pfalz, where most everyone is wrapping up the vintage. 2011 was the complete antithesis of 2010, but both years are such rare and bizarre beings that you could go a lifetime (and many have) without seeing these conditions again, and so I consider myself fortunate to have had them so early on. I am left to wonder though, just what a more normal vintage looks and feels like. Hopefully, time will tell.

“With a warm, early spring, the year began some three or four weeks ahead of the norm. This came to the joy of a lot of growers who had made much less wine in the small 2010 vintage (about 25% less than usual for the whole of Germany), because it gave hope that a larger yield might have the chance to ripen during the course of the year.

“In early May, much of the country was devastated by early frost. The vineyards most affected were those on deeper ground as the freezing air rolled down the steeper hills of the better vineyards and settled in frost-pockets (many of which had been known even by the Romans to be poor land for the cultivation of vineyards for this reason.) There was damage in almost all of the 13 wine regions (Weinbaugebiete), and even the steepest vineyards of the Franken region were destroyed, including most of the famed WÃ¼rzburger Stein, which is one of Germany’s better sites.

“In all it was estimated that somewhere around 20% of the total area under vine in Germany was compromised by frost, with parts of the Pfalz, Rheinhessen, Baden, WÃ¼rttemberg, and Franken taking the brunt of it. Early panic set in and not only did grape prices (for the not-yet-grown 2011 vintage) start to skyrocket, but prices on just- or soon-to-be bottled 2010 wines were amended.

“The initial 20% damage figure has since been dialed back in light of the second-generation growth of lateral shoots on these vines, but seen in even the best light, it caused havoc and a lot of hard work. Fungus and disease strikes different varieties at different stages of growth, and different methods and different chemicals (or organic sprays) need to be applied at different times. What if you have two or three generations of grape bunches on the same vine? That difficult question was answered with better or worse results in 2011.

“There was absolutely perfect fruit-set in 2011. So perfect, that if you weren’t careful to spray hormone to reduce flowering (especially on pinot varieties), or to later partition bunches, you probably ended up with severely compact bunches and rampant botrytis (leaf thinning and shoot-thinning were also paramount to allowing enough airflow against oidium and later botrytis.) Clonal selection and method of pruning also proved to be an important consideration, and sandy, stony, well-drained vineyards were again extremely advantageous.

“In July, rain finally started to come and really accelerated the growth of the vines. Some growers commented to me that they had never seen the Pfalz so juicy green — it is normally the driest area in Germany. I was able to spend some time in the regions of the Rheinhessen, Baden and Hessische BergstraÃŸe over the summer and these sentiments were echoed there too. Everyone was becoming very optimistic about the quality of the vintage even after the setbacks caused by the frost. 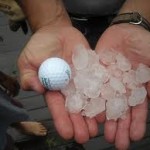 “But summer hail damaged Franken again, which now has to contend with three generations of bunches on the vine, making the 2011 vintage the most labor-intensive that those guys have probably seen in 100 years. I can’t imagine the selection that had to be carried out during the harvest.

“In late August, there was a much more publicized hail-storm that devastated parts of Baden, the Pfalz, Rheinhessen, and most notably the Mosel, where major damage was incurred in some of the most famous vineyards of the Mittelmosel. When a storm comes so shortly before the harvest, there is the initial damage to attend to, but also the risk of botrytis and vinegar bacteria attacking first the damaged grapes, and then infecting the healthy ones, and finally you have to worry about the shock to vines and the resulting slowing of assimilation. Even organizing the labor to carry out the fruit-dropping must have been near impossible so early on when most of the pickers where still in Poland.

“The early year and the resulting rapid accumulation of sugar coupled with rain gave the EU and ultimately the different states (Bundesländer) reason enough to allow acid additions in Germany for the third time this decade and in history (2003 and 2009 being the other two ““yet people still don’t believe in global warming.) What a difference after so much de-acidification was carried out in 2010.

“It seems to me that the best way to have retained acidity naturally was to have planned on a slightly bigger harvest by leaving some of the bunches that you may have originally slated for green-harvesting. Reaching physiological ripeness was no problem at all, so if you were willing to sacrifice a little Oechsle for greenness, you probably ended up with very good balance. Selective harvesting and a little blending later on couldn’t, hurt either. Overall, pH has been good for the important varieties, if the acidity has been a little low.

“I don’t really like labels for vintages and I detest scores and ratings: Great Vintage, Poor Vintage, Difficult Vintage, Solid Vintage for Red Burgundy in communes beginning with the letter “˜S’, Weak Vintage in Irouleguy, Totally Average Vintage for Channel Island Malbec, Complete Shit Vintage in northern Alberta. As a year unfolds, so unfurls a story, and to diminish it to a couple of words, or worse, the completely useless score, is to discount every busted knuckle, cut, dislocated shoulder, and bruise that the farmer may endure.

“Much more important than the physical ailments for some are the scrutinizing of philosophies, the strengthening or discarding of principles, and the even the relationship one has with the spiritual. There are difficult decisions to be made and how one reacts to the challenges that the weather brings — especially in wine-growing regions on the climatic fringes — says more about a winemaker than any score a critic may give a vintage.)

“Upon tasting the wines from a few estates (some of them are now through with fermentation though far from finished) I’m tempted to recall Alsace a little bit. The acids are on the low side, and the sweet wines will suffer because of it. The dry wines and red wines, on the other hand, should be very good.

“I like the prospect of dry, entry-level Riesling without screaming acidity, even if the grander wines need to shave off a couple of years in the cellar. There shouldn’t be any fear that this is another 2003, but maybe more in the direction of 2009. It will be fun to see how it all ends. 