“He’s made the last turn, and he’s headed home” … in non-horse-racing parlance, I’m in the stretch run of a massive fortnight tasting run, going from about 150 samples on hand to about a dozen, not counting the Ports that have been gathering dust for a year or three. And now I have a gameplan for the Ports. This and other recent tasting gleanings:

• We had a boys’ Zin Night last night, and despite two tragically corked wines (a Turley Hayne and Carlisle Pietro’s Ranch), a 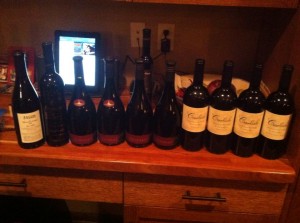 great time was had by all. One of the surprising takeaways came from the incredible Carlisle Pietro’s Ranch that wasn’t corked, a 2006. It was beauteous, pure, expressive and utterly harmonious. I gingerly checked the alcohol: 16.1 percent. This stunned everyone, simply because there was nothing that remotely hinted that this wine had high alcohol. But it’s more evidence of something I’ve always believed, that what matters is balance, and that eliminating high-alcohol wines from one’s world is punishing only one’s self.

• On the other hand, I did have a slightly enlarged noggin this morning, which probably had as much to do with the volume I consumed as the alcohol content (a couple of the Turleys also were 16-plus). It was a reminder, though, to always have Zin Nights when the next morning does not involve going to work.

• One thing I noticed, partially because Carlisles and Turley dominated the offerings, was the recognition of a “house style,” particularly with the Turleys. Despite coming from distant and distinctive locales, they had the same kind of minerality in terms of flavor and volume. That brought to mind some great advice I had received earlier in the day from Ryan Opaz, proprietor of the fabulous Catavino website. The Minnesota native is now based in Portugal, and I told him that I had let Port samples stack up because I was baffled as to how to fairly assess them. He suggested doing it over the course of a couple of weeks, a sip of each every few days. At a certain point, he said, “house styles” and the distinctions between vintage and late-harvest bottlings might well become clear. Can’t wait to implement, beginning this week.

• I worked my way through a dozen California chardonnays a few nights earlier, and as happened a month or so ago, I 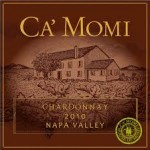 was struck with how un-oaky and un-buttery most of them were. As I assessed offerings from Ca’ Momi, William Hill, Sequoia Grove and other, the words “clean” and “pure” showed up a lot. A most welcome trend.

• More recently, Napa cabs were the order of the day, and many were jammy at first and then kinda stopped. (It should be noted that they were from the difficult 2010 and ’11 vintages, and many were quite good, if generally overpriced.) Anyway, with one of those drop-off-the-table-in-midpalate wines, my eloquent friend Leo blurted out: “It turns into water.” Nailed it! I have labeled this the Anti-J Man Syndrome, since it reverses perhaps my favorite miracle in the saga of Jesus.

• Finally, at another gathering of friends, somebody was talking about varietals, and said “I like syrah, but pinot noir is more about how I want to live my life.” I’m not sure exactly what he meant — the unpredictability of pinots, or maybe the earthy essence? — but I like it.