My semi-harried life has been filled with wild and wacky and wonderful wine experiences and encounters of late. A few of my faves: 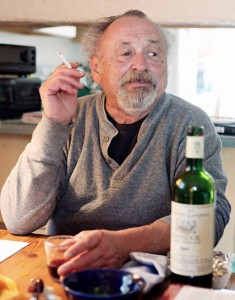 • One of the world’s great writers, Jim Harrison, at left with his beloved Domaine Tempier), passed away recently, prompting a Men’s Journal post on his 13 rules of drinking (actually, more about not over-drinking). Love this quote from an earlier article: “In my forties, I turned to wine with a passion,” he continues. “I tested 34 Côtes du Rhônes in search of a house wine I could afford … I could have become a wine snob, but didn’t. The escape was narrow, but my salvation was several near-bankruptcies …. I will not be stopping on the way home from the office for one of the syrupy California ‘cabs’ so favored by nitwits …. Money can distort the buying and drinking of wine just as it distorts art in the gallery and auction businesses.”

• OK, so it’s hard to determine whether organic grapes make better wine than “regular” ones. But recently I received two samples of the 2013 Vento di Mare Siciliane Nero d’Avola, one with organic grapes, the other not. And the organic one had decidedly more focus and character than the other one, which aside from a nice anise nose, was dull. Not a purely scientific experiment, but interesting nonetheless.

• Here’s a fascinating look at which regions might benefit the most from climate change’s effects on grape-growing. It’s also 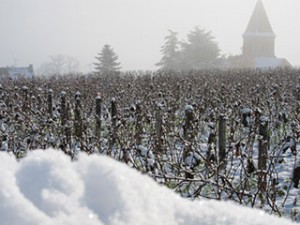 a lesson in why one should not throw out the baby with the bath water. I almost stopped reading after the sentence “But in the next few decades, global warming could make regions like Bordeaux and Burgundy completely inhospitable for its signature grapes.” Clearly, the author never has been to Burgundy. It’s frickin’ cold there; climate change might alter farming practices a bit, but it would have to get ridiculously warmer in Burgundy for pinot noir and chardonnay to stop thriving there.

• With winter not letting go of its #@%^ grip, it was a fitting time for our second Boyz Syrah Night of the season. And a festive occasion it was, with some fantastic entries from the Rhône (Clape Cornas, Chave Hermitage, Gaillard Côte-Rôtie) and Australia (Old Bastard, a surprisingly unsweet Mollydooker Blue Eyed Boy). But for the most part, the American wines proved disappointing, especially a Cayise (for the second straight BSN) and even including a flight of Saxum Bone Rock. But my friend Mark and I made a fabulous out of the ’07 Saxum and a Booker “Oublie”; the same was infinitely greater than the parts.

Point is, when tasting some wines that are disappointing, you have absolutely nothing to lose by trying to combine a couple of them; one might fill in the holes in the other, and vice versa.

• So I was sent a boatload of petite sirahs from sundry California producers via the fantastic P.S. I Love You organization, and 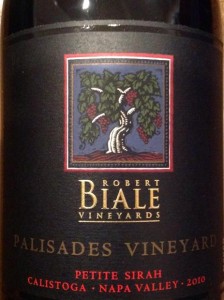 invited some friends over to sample them. Frankly, it was an exercise in futility and really hard work, because we were in virtually all 16 cases committing gross infanticide. These were 2012, ’13 and ’14 wines, and, aside from a couple of simply bad ones, need several more years before a fair assessment can be made. But we doggedly explored all 16 of ’em.

The exceptions that proved the rule: 2013 Robert Biale Palisades Vineyard Calistoga Petite Sirah, where we fought through the youth and super-ripeness to uncover some wonderful harmony, structure and length; the 2014 Cycles Gladiator Central Coast Petite Sirah, again balanced despite huge dollops of fruit and smoke, and the 2013 Ridge Lytton Estate, sturdy, stout and endless.

Wish I coulda set these down, though.