Not sure if my vote helped put any of them over the top, but the just-announced inductees into the Vintners Hall of Fame was almost a mirror image of my ballot. Or maybe we all just lemmings without knowing it 😮 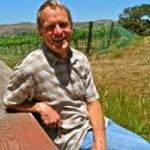 I agree wholeheartedly with not only the choices, but the sentiment expressed by nominating committee chair W. Blake Gray in the press release: “I’m especially glad that we have the joy of sharing this honor with Peter Mondavi Sr., and John Parducci, who are still going strong in their 90s, as well as Richard Sanford, the youngster in this class, who just turned 70 this year.”

Amen, Blake. These honors mean so much more when the recipients are alive; as a baseball fan, I hated to see Ron Santo not make the Hall of Fame while he was still around, and almost hope he doesn’t get in posthumously because of how transparent that would be.

Anyway, here are the Vintners Hall’s bios of the new inductees:

Joe Heitz
Joseph Heitz started his career making sweet wines as commodities from Central Valley grapes. In 1951 he went to work at Beaulieu Vineyard under André Tchelistcheff, and helped develop a quality control regime. Heitz spent 1958 to 1961 establishing the Fresno State enology curriculum, setting up its hands-on approach. In 1961 he acquired the Only One winery in St. Helena, where he purchased and perfected wine blends to sell under the Heitz Cellars label. Heitz was among the first Californians to price his wine on the basis of “perceived sensory quality” and not the cost of materials and labor. He set the tone for Napa for decades to come by realizing that higher prices ($6 to $9, as opposed to the standard $2-$3) would not repel the customers he wanted, but might actually cultivate them. For many years Heitz believed strongly in blending to achieve his results, but when he was able to secure grapes from Martha’s Vineyard, he quickly established one of the first iconic single-vineyard Cabernets from Napa Valley.

Peter Mondavi Sr.
For showing just how fresh and fruity California wine can be, few vintners have been as instructive as Peter Mondavi Sr. Studious and quiet, he often transformed theory into practice, establishing new standards for the wine trade. In 1937, while still a university student, he researched cold fermentation, and his subsequent use of the technique and of sterile filtration improved, virtually overnight, the cleanliness and crispness of California white wines. For 68 years he’s continued his experimental ways at Charles Krug Winery. He was among the first to use French oak barrels. He was the first to release Chenin Blanc as a varietal. He was the first to install glass-lined steel tanks, thereby better showcasing the state’s fruit, slowing maturation of wines and prolonging their lives. He was an early advocate of the centrifuge and of fermenting Chardonnay in oak barrels. Early in his tenure at Charles Krug, the industry’s first winery newsletter debuted. He began tastings for distributors, restaurateurs and consumers that became the model for the industry. And he was one of the early growers to see in the Carneros district an accommodating home for Chardonnay, Pinot Noir and Merlot At 96, he’s still at it.

Myron Nightingale
Myron Nightingale began his career as a winemaker in 1944 and by 1949 he was chief chemist at Italian Swiss Colony, one of California’s largest wineries. In 1953 he took charge of Livermore’s historic Cresta Blanca Winery, guiding the resuscitation of the rundown facility. He made enological history with his Premier Semillon made in the style of Sauternes, in which the botrytis cinerea was actually produced in the laboratory. Nightingale moved to Napa in 1971 to apply his resuscitation skills at the old Beringer Winery, newly purchased by Nestlé. As winemaker and director of operations, he did far more than just bring the dilapidated facility back to life; he gradually made it a large- scale producer of world-class varietal wines. The Los Angeles Times called him Beringer’s “Angel of Mercy.”

John Parducci
Since 1940, when he took over winemaking at his family’s eponymous Mendocino County winery, John Parducci strived to improve the quality of wine while making it more accessible. Determined and outspoken but gracious, he met those goals for more than half a century. He constantly upgraded equipment. He experimented with grape varieties virtually unknown in California, such as Nebbiolo and Flora. He was the first to label French Colombard as a varietal. He was an early proponent of vintage-dating wines. He made fruit wines. And long before wine coolers became a staple of the state’s wine trade he made a popular forerunner, a white wine steeped with woodruff and infused with strawberry juice. Decade after decade, his wines were praised for offering clean and clear varietal flavors at fair prices. As recently as 1975, a Chardonnay he made without any oak won a gold medal at the Los Angeles County Fair. In 1999, at 81, five years after he ostensibly retired, he jumped back into the business by buying bankrupt Zellerbach Estates and making it over into McNabb Cellars. A wine trade may have developed in Mendocino County without John Parducci, but it wouldn’t have been nearly as colorful, dynamic and progressive.

Richard Sanford
A Burgundy fan, Sanford graduated from UC Berkeley with a degree in geography in 1965 but was immediately drafted. He got out of the Navy in the late 1960s with a passion for Pinot Noir. He drove across Santa Barbara County with a thermometer before settling on a site west of U.S. Highway 101 in the Santa Ynez Valley. For some years Sanford had the west side of the highway to himself; he was the first winemaker to prove the potential for Pinot Noir in the chilly Santa Rita Hills. He founded Sanford Winery in 1981 and spent the next 20 years making some of the best regarded Pinot Noirs from the region. Sanford left his namesake winery in 2005 and founded Alma Rosa Winery & Vineyards.

Albert Winkler
Albert Winkler joined the Department of Viticulture and Enology at the UC Davis in 1921 and retired in 1963, serving as department chairman from 1933 to 1957. His research on grapevine physiology was critical to our understanding of how pruning and trellising influence vine growth and grape quality. The canopy management methods employed in the best vineyards today are based on principles Winkler elucidated. He also studied the relationship between temperature and fruit ripening and showed that for a given variety, a constant amount of accumulated heat is required to ripen the fruit no matter where it is grown. This work led directly to the regional classification of California’s grape growing areas, along with recommendations for varieties that were best suited for each region. In addition to his formal teaching at UC Davis, Winkler was active in viticulture extension programs, writing many extension leaflets and giving frequent talks to grape grower groups. His classic textbook “General Viticulture,” published in 1962, has been used by thousands of winemakers and grape growers and translated into several languages.