Syrah Night is about revelry, not reflection. But like most wine experiences, it can provide something to think about, at least once the next morning’s inevitable large noggin subsides.

The most recent rendition of the semi-annual event ““ gathering a group of hale-fellows-well-met and more bottles than we could possibly (or sanely) finish ““ was a blast, as any mix of fabulous food, friends and fermented juice tends to be. In between a vibrant Chablis and a Port brought by birthday boy Mike (and bottled in his birth year), we enjoyed flight after flight of delicious, sometimes transcendent syrahs or syrah-laden blends. 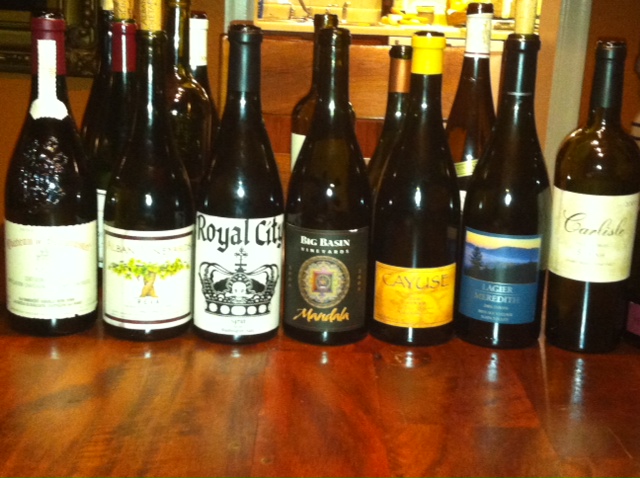 There was but one disappointment: a 100-point (Parker) Usseglio Cuvee de Mon Aieul 2007 that was swell but seemed to be in one of these “resting places” to which Chateauneuf-du-Papes are particularly susceptible. Blessedly, that flight’s 1998 Beaucastel was profoundly enjoyable, and the two other French offerings (’03 and ’09 Chave Saint-Josephs) were exemplary.

Almost all of the California bottles hailed from the wide-ranging Central Coast, from Santa Cruz (Big Basin) down to San Luis Obispo (the sublime, and rare, Turley “Red Coat”). My favorite was the Carlisle James Berry 2007, and we vowed to have that alongside Saxum’s ’07 James Berry (another 100-pointer) at a future gathering.

But the best flight of the night, by acclimation, came from Washington, a pair of ’07s: Cayuse Cailloux Vineyard Walla Walla and Charles Smith “Royal City” Stoneridge Vineyard. Wow and wowser. The latter was also a 100-pointer, via the Wine Enthusiast’s Paul Gregutt, and as much as I trusted Paul’s palate before, I’ll now move heaven and earth to find any wine to which he awards a perfect score.

Later, someone (not sure who; Syrah Night can get a bit foggy) said that “they’re still figuring out where syrah does best in Washington.  While this assessment of wine in the New World has almost become cliché, that’s because it’s true.

We know cabernet does extremely well in certain parts of Napa, and pinot in pockets of the Russian River Valley. But at other sites with particular soils at sundry elevations and varying exposures, what should be grown there (if anything) is being sorted out even in California’s older grape-growing regions. Hell, we only recently tumbled to the fact that syrah shows better there when grown in cooler climates, and merlot’s fittest locales are still being sorted out. And that’s just the reds, and only a handful of those.

Which, oddly enough, makes wine’s future in the rest of the country even more promising. Only very recently have growers and vintners started to, uh, unearth suitable matchups of grapes and terroir from Arizona to Vermont, from Florida to Idaho. Happily, nascent wine industries in these states have huge advantages over previous generations in vineyard management, winemaking techniques and communication.

In Minnesota this year, spring arrived very early. Too early, it turned out, as an April frost knocked out some of the grape crop. The most common response from wineries was: “The farmers who lost grapes were growing them in the wrong place.  Where vines should be planted and which types of grapes fit particular spots is most decidedly a work in progress here, and we’re decades behind West Coast states that still haven’t figured all that out. 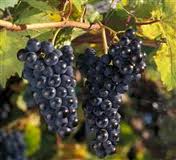 As every region gets wiser on this front, the resulting wines will get better and better. There’d have to be a serious acceleration of climate change for syrah to make it in Minnesota, but in a decade or two, our gang might just be having a Marquette Night (grapes at left).