The great responses keep on coming to a query asking wine folks to write about “an oh-wow experience at a particular vineyard or AVA … it can be about terroir, or beauty, or something mystical/ethereal, or all of the above, whatever makes it feel special.” Check out the first set and the second one when you’re done here:

Darrin Minehan, Sorella Wine & Spirits, Minneapolis
The Trentino-Alto Adige region of northern Italy was part of my first European trip back in the mid-1990s and my most recent trip in September 2014. I wouldn’t say that this is the Italian region that has shown me the most stunning wines, but I was stunned by the wines I tasted there and by being in such a beautiful place. 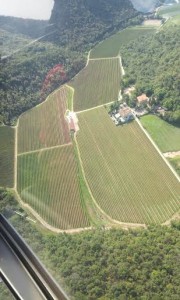 lunchtime tour of the vineyards and Kellerei at Cantina Terlano. The winery is perched high on a steep hillside and has an interior staircase that seems to descend several stories (13 meters, in fact) into the earth. There we found dusty stashes of pinot grigio, pinot bianco and other varieties that went back to the 1950s.

Shockingly, these bottles weren’t just for show; we tasted multiple bottles from each decade and found several youthful and lively examples going back to the early 1960s. Twelve of us were packed into a tiny room with one long table and shivered through a lunch of speck, other assorted cold cuts, breads and regional hard cheeses. The winery had just finished carving its young winemaker’s likeness into the end of a large wooden barrel, as it had done for each of his predecessors; his was barrel #4 and the winery was founded in 1893 – you do the math.

My most recent visit was to spend time studying the Trento D.O.C., which produces world-class sparkling wines in the Champagne method highlighted by the Ferrari Spumante house. As if this area wasn’t gorgeous enough from the ground or the hillside vistas, this junket included a helicopter tour of the Trentino vineyard areas, Lake Garda and the breathtaking, jagged mountains of the region. The 100-percent chardonnay bubblies produced here gave me a new perspective on the place of elegance in the sparkling wine world.

Eric Freeberg, New France Wine Company, St. Paul
My first job in the wine business, other than waiting tables, was working in the cellar at a winery in Santa Cruz, Calif. I knew so little about wine at that point.  I knew I liked it as a beverage and that one could clearly dive pretty deep into its mysteries. And there were so many mysteries. 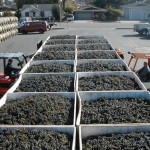 The job in the dark, cool cellar was not quite as romantic as I had hoped, but it was good work with lots to learn. The mystery and the magic that I was
most closely involved with was fermentation. Changes that happen as grape juice turns into wine are absolutely extraordinary. Chemistry and biology (my background) are great at describing and measuring those changes but they only get you so far. There was something deeper going on.

Harvest meant lots of long days. We would receive grapes nearly every week in the fall as orchestrated by the winemaker and the weather. Not being involved with harvest decisions, we  just dealt with what was coming in and by various means got the fruit into a tank to ferment. We needed to track everything, of course, and each tank would get a notecard (handwritten) that would follow the wine through fermentation. 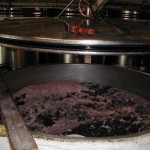 The card would include basic information name of the grape and the vineyard, date of harvest along with daily notes and details on the progress of fermentation. I got pretty good at being able to figure the grape in the tank, whether it was the wild, exotic fruity darkness of charbono or the shrill and tightly wound character of barbera as the wines emerged out of their cocoons of sweetness.

The vineyard character was less easily pinned down. One load of grapes, though, brought it home. I eventually learned that most of the magic happens in the vineyard and one’s job in the cellar is to not get in the way of that magic expressing itself. 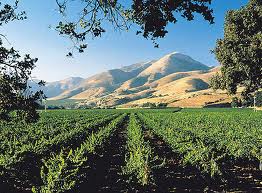 There was some expectancy on some late-arriving syrah from the Bien Nacido Vineyard (left) in the Santa Barbara area.  I had a sense that these grapes were relatively expensive so there was some extra pressure to not screw up.  We decided to stay late and crush them rather than let them sit on the crushpad overnight.

I had expected that expensive grapes would be big, dark, full, beautiful clusters. As the bins came out of the truck, I was quite surprised and sad to see that they were anything but. The clusters were small, limp, loose. I had some serious worries that we might already be defeated in our task of preserving the magic.

We crushed and fermented with all the loving care we could muster that night. The numbers, sugar and acid were in the expected range — but they actually tell you very little about the magic.   Despite my initial apprehensions the magic was there.   As the wine moved to dryness, the vineyard started to express itself in the perfume that syrah can take on from certain places — mostly in the Northern Rhone. Syrah lovers will know it a mile away.

Bien Nacido Vineyard grows some pretty phenomenal pinot noir and chardonnay, too, and this challenges an Old World belief that one grape is the best translator of a vineyard’s terroir. And I’m not sure if all the syrah that comes out of Bien Nacido is as good and interesting as what came out of the cellar that year. It’s a large vineyard, and good winemakers develop a talent for choosing the best plots. Syrah from Bien Nacido turned on some lights for me.