Our story begins, as so many wine-soaked sagas do, on the Iron Range of northern Minnesota. It was there that Cesare Mondavi moved from Italy’s Marche region just after the turn of the last century, joining his brother, Giovanni.

While in Tundraland, the two of them squired several children. One of Cesare’s, born on June 18, 1913, was called Robert.

When Giovanni died in the mines. Cesare (left) found himself “chained to so many paisanos,” according to his great-granddaughter Carissa, that he had to find a vocation that was more remunerative ““ and less dangerous ““ than mining.

Cesare had been traveling to California every autumn to buy bulk grapes and tote them back home for some North Country winemaking. Sensing that California was the place he oughta be, he loaded up the truck and moved to “¦ Lodi.

He shipped grapes around the country during Prohibition and learned the business, and in 1943 had saved enough to buy the old Charles Krug winery for $75,000. “Not bad for an Italian immigrant who came to America in 1906 at the age of 18 with $15 in his pocket,” said Carissa.

His sons Robert (left) and Peter helped out, then famously feuded for years before Robert left the winery in 1965. (In his autobiography, Robert wrote that they had a fist fight over a fur coat Robert had purchased for a White House visit.)

Robert started his eponymous business in 1966 ““ the first winery built in Napa since Prohibition — with the goal of making world-class wines.

He also became a de facto worldwide ambassador for California wines. “It was amazing

going to France,” Carissa (left) recalled, “and have [Chateau Haut-Brion icon] Jean-Bernard Delmas] saying “˜You see this, Bob? I learned this from you.’

“My grandfather liked to say “˜there are very many visionaries in this world. But there are very few who can achieve that vision.’ He rode the Robert Mondavi winery to the edge several times. 

Too many times, it turned out. In 2004, Robert was forced to sell to Constellation Brands, which now makes scores of wines bearing his name, few of which are remotely up to their namesake’s standards.

“We lost the family winery, but we can’t bemoan that,” Carissa said. “That’s America: You can build something big, and you also can lose it. 

Carissa’s dad, Tim (left), who had been a guiding force at his father’s winery for decades, saw the setback as an opportunity. He founded Continuum in 2005, with the goal of making only one wine, a terroir-driven Bordeaux blend.

The result is spectacular. The 2007 Continuum is one of the best wines I tasted last year, equal parts power and elegance, with the depth and structure to age beautifully. But man, is it delicious now. Drinking it elicited one of those rare “ahh, so THIS is wine” reactions. 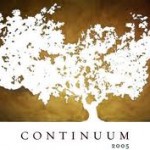 So the Mondavi clan has come full circle, with Tim’s wing all working together. Carissa is a wonderful ambassador, and her sister Chiara painted the striking label, the shadow of a 25-year-old cab franc vine planted by her dad.

And nearly a century after Tim Mondavi’s grandfather turned Lodi grapes into wine in Virginia, Minn, he is making a single wine from a single estate, from 62 acres in the Pritchard Hill region.

The Continuum name, Carissa said, “speaks to the fact that we haven’t missed a vintage since 1919. “The wine “honors my great-grandfather’s pioneering spirit and my grandfather’s extraordinary vision. 

True, all of that.