As if there was not already enough to like about Oregon’s Wine Country, my buddy Joe and I discovered perhaps America’s best strawberries.

“Fruit,” said our friend Deb Mortimer over dinner on the ridiculously 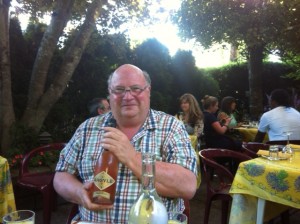 That includes grapes, although on our last visit the peaches also proved the best we had sampled on these shores. And it certainly includes the grapes at Le Cadeau, owned by Minnesota transplants Deb and her husband Tom.

The next morning, Joe and I became the first customers to darken the doors of Le Cadeau’s new tasting room in a gorgeous building in Dundee. The 2010 Rocheaux and Merci Reserve were drinking beautifully, with the promise of even more wondrousness to come.

That capped a 2 3/4-day whirlwind that launched with a bacchanalian night that left us “sluggish” (our agreed-upon characterization) the next morning and included our first encounter with disgorgement/dosage, two dinners with wonderful friends and several hours apiece with four fabulous vintners. 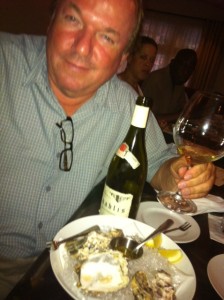 In other words, my kinda trip ““ and the two ensuing days in Portland (left; and yes, that’s Chablis, but hey, it’s Dauvissat), with a visit to a superb urban winery, did not suck.

We had set out to try to discern distinctive traits of the Willamette Valley’s AVAs, to see what was going on with white wines out there, to soak in knowledge from vintners we admired mightily, to see how the highly touted 2012 vintage was faring and to eat and drink to our palates’ content. Mission accomplished on all fronts.

• Neither a picture nor a thousand words could do justice to what Joe and I agreed was the coolest vineyard we’d ever trod upon (take that, La Tache!): Roco’s Wit’s End, in a remote corner of the Chehalem Mountains area. What made it special was not the vigorous vines or the sublime soil or the ideal exposure, but just the way it felt. That of course made the wine that we later sipped from that locale taste even more spectacular.

• Doug Tunnell is the most down-to-earth former network correspondent you would ever want to meet. The Brick House owner/winemaker talked plainly but eloquently about the amazing site his winery occupies in the Ribbon Ridge AVA. His 2011 “Evelyn’s” showed again why it’s probably my favorite American pinot. During our two hours together, there was no mention of his years intoning “This is Doug Tunnell, CBS News, from Paris” and throwing it back to Walter Cronkite.

• These people work hard. Tom Mortimer and Raptor Ridge owner/winemaker Scott Shull have fulltime day jobs, which might explain why the latter says “there’s nothing like spending 8 hours on the tractor.”

• The white wines were widely varying in style but not in quality. Tunnell’s 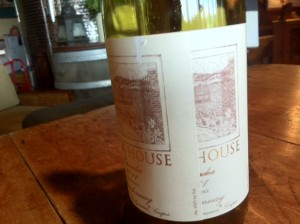 • Thomas pinot noir deserves its status as a cult wine. We had two bottles of the 2010 thanks to Janie Brooks of Brooks Wines (which we regrettably didn’t get time to visit), and it was that nector-of-the-gods stuff that makes it clear why so many of us fall hard for pinot noir. Earthy, ethereal, endless, harmonious. We also had an ’07 with the Mortimers, and it was another “wow” effort. In fact, that famously slammed vintage is showing beautifully; we also loved an ’07 from Stephenson-Barrie.

• Not only is it tough to tightly characterize elements of different AVAs’ pinot noirs; it’s tough to even do that for a single vineyard. Bethel Heights 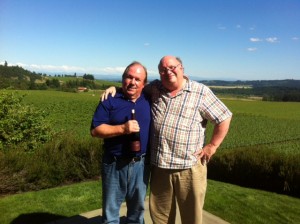 and St. Innocent both make super pinot from the Justice Vineyard, but good luck identifying both as being from the same site. At Bethel Heights (left), the 2011 is massive, almost monolithic, but seriously promising. St. Innocent’s ’11 was more feminine, or at least androgynous, and rivaled the Momtazi as my favorite of Mark Vlossak’s single-vineyard bottlings.

• The 2012 pinots are as good as advertised. In general, our barrel tastings showed fabulous fruit and formidable structure, meaning they likely will age for a decade or more ““ on the off chance we can keep our grubby little paws off of them for that long. It’s a buy-by-the-case vintage.

And Willamette is a visit-as-often-as-you-can destination.