In working on another project, I got chance to interview Peter Stolpman, partner at his family’s eponymous winery in 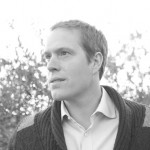 California’s Ballard Canyon. I’m a huge fan of the wines, so I took a few minutes to veer off-topic and talk about why they’re so compelling. An edited version of that interview:

What makes your grapes and your wines so distinctive?
No. 1 would be limestone. There are small pockets of the white rocks from our area all the way through Santa Cruz and toward Monte Bello. As you go up the coast, the limestone gets older. The younger limestone has higher Ph, so we have a super pH in our wines, nice acidity. Also dry farming, having the vines sucking to get to the root.

This is one of the only [U.S.] regions with a transverse [east-west mountain] range. So we are in a [wind] chute coming straight from ocean’s path after a duration of extreme heat. We will heat up to 90 but only for an hour, hour and a half, right after fog and before that wind comes in at 2, 2:30, a constant strong wind. So we have hardier varieties that continue to photosynthesize in that wind, like syrah in particular and the other Rhone varieties. 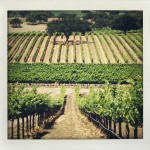 We take people to the top of the mountain and point to the bottom, to cacti next to Ballard Creek. It’s parched, arid; you can feel the arid climate just like the northern Rhone.

Why did the much-predicted California syrah boom never happen?
What’s happened with syrah was that because of the hardiness of the grape, the entire industry gave in to the temptation of growing syrah wherever they were. … But it’s like the [previously ill-fated] Cal-Ital movement; people are gonna drink what they like.

In hot areas, you get a very ripe red wine, thick, rich, but you lose all the nuance that make syrah a noble grape … When we get together here [and drink syrah], we don’t talk about fruit. We talk about blood and iron and olive and meat. … It has returned to a niche. All the big companies have given up on it. 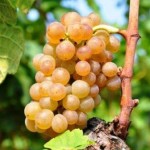 You also do really well with roussanne, which most people use as a blending grape. How did that come about?
We prefer our roussanne as a table wine, and we’re in a great situation, because we can pick in mid-November. We riddle the fruit in October to get the shaded part up; there’s great solar radiation in October and November, still warming up during the day and we get late sun, and so it continues to ripen. Winemakers will come out and say ‘what are you doing with all that late-harvest stuff?’ [chuckles] That’s how it’s picked. It blows people away, this beautiful gold color.