As with most grapes, anyone who says “I don’t like pinot gris/grigio” doesn’t really know what he or she is talking about/saying.

What they probably mean is that they don’t like the type of pinot gris/grigio they have encountered, perhaps because there’s a lot of crummy stuff out there or because, as with chardonnay, syrah and most every other varietal, it is made in a vast array of styles. 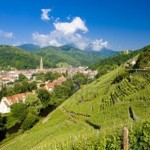 In Alsace (left), where it has been grown since the 1600s, pinot gris generally is rich, full-bodied, spicy, lush and honeyed. In Italy, though, pinot grigios are often innocuous if not bland, forgettable if not regrettable; but in the mountainous northeastern regions of Friuli and Alto Adige, the varietal versions are truly distinctive, with freshness on the nose and palate and tangy minerality.

Legendary Oregon vintner David Lett (Eyrie) brought pinot gris to these shores in 1965, and over the decades, the grape eventually surpassed chardonnay in Oregon plantings. Today just over half of Oregon’s white wines are pinot gris, and wineries usually use the French name to reflect style similarities: big ol’ floral notes, lush fruit, spicy minerality and an often viscous texture.

Most California versions go with the Italian spelling and shoot for crispness and citrus flavors, although cooler locales in Sonoma and Mendocino produce complex, fuller-bodied bottlings. Coming up on the outside: Australia and Washington, which tripled its plantings in five years and now has more acres planted than Oregon. 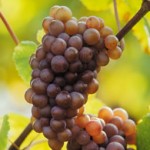 That’s actually about it geographically these days. The grape (left) used to be a Loire staple and was blended into red Burgundies in the 18th century but no longer is grown in either region.

That also might explain why pinot gris rivals pinot noir as an ideal match for salmon. The richer ones also play beautifully with the Franco-German cuisine of Alsace: roast pork/ham, trout and game birds. Most any good pinot gris/grigio is suited for creamy soup or light- to medium-spiced Asian dishes, or a hunk of hard Italian cheese.