Amidst the onslaught of digital flotsam and jetsam ““ mostly the latter, since little of it floats ““ that comes my way daily was this little nugget (edited for length but not for the egregious spelling errors, including in the prize winery’s name):

Having an extensive wine list is a point of pride for many restaurants. The world-famous Sardine Factory in Monterey, Calif., sets the bar with its one-of-a-kind 35,000-bottle wine cellar that houses prestigious vintages including 1932 Maison Leroy Meursault-Charms; 1983 Remoissenet Pere & Fils Le Montrachet; 1936 and 1966 A. Ogier & Fils Chtneauneuf du Pape Reserve; six vintages of Charles Krug Winery Cabernet Sauvignon starting from 1954; and a rare 1870 Chateau Lafitte Rothschild Pauillac, among many others.

The 1870 Chateau Lafitte Rothschild Pauillac won’t last long though, as the Sardine Factory’s CEO Ted Balestreri will open it after a losing a bet with U.S. Secretary of Defense Leon Panetta. On New Year’s Eve 2010, Balestreri bet that if Panetta could find Osama Bin Laden in 2011, he would open the Rothschild for Panetta. Needless to say, Panetta will be enjoying a very nice bottle of wine in the near future when Balestreri hosts a special dinner at the Sardine Factory honoring Panetta and his success. … 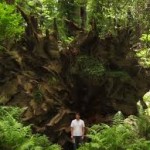 First off: Way to go, Leon, for having the cojones to make the bet (although it would be nice to know what was at stake on your end: an Aston Martin, maybe, or a bunker to store all of the restaurant’s wine in case of war?)

Second: I love Big Sur, dearly wish I’d stumbled across that tree in my travels there, and would like to see that table, bar, etc., almost as much as the Sardine Factory’s wine collection.