Vincenzo Ippolito is Italian to the core, an ardent young man and an open book. But his blend of the soulfulness and passion that typifies his countrymen is muted. He’s more genial than garrulous.

The Ippolito 1845 winery is in the toe of Italy’s boot, in the little-known (especially to wine people) region of Calabria. The fifth generation of his family to grow grapes and the third to make wine, Ippolito is quietly determined to help his home turf get past that little-known part, especially with the red galioppo grape. 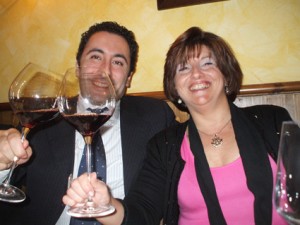 “Our philosophy was always to bet on indigenous varieties,” said Ippolito (shown at left with journalist Giulia Cannada Bartoli). “They’re not like any other wines in the world. My dream is for galioppo to become as known as nero d’Avola, primitivo or even aglianico.”

He realizes that it’s an uphill battle, but points out that the ever-more-popular nero d’Avola grape originally was called Calabrese, and still is in his region. The Ippolitos blend some into their Rosso.

“The people in Sicily are smarter than us,” he said with a smile. “They decided to call it nero d’Avola after the town [of Avola]. The name Calabrese reminds people of Calabria.”

There’s also the matter of geography. Calabria has the same hot, arid climate as its island neighbor, but is much smaller, and a large portion of the land is not suitable for vineyards.

“We are mostly mountains,” he said. “The only vineyards are just from the end of the mountains to the coast. We are not so much corporations, mostly individual farms. And our olive trees are protected, so we cannot pull them up to plant grapes.” (Not to mention, although he did, that Calabrian olive oil is justifiably world-renowned.)

Ippolito’s main goal, of course, is to sell the 1 million bottles a year he and his brother Gianluca make, 30 percent of which is exported. The winemaking and marketing work keeps the two of them seriously busy, but they are big believers in being jacks of many trades.

“We all wear many hats,” he said. “How can you talk about the wine if you don’t know the vineyards, the conditions, the winemaking process? If you’re in the winery, how do you know what the market needs? So we do both.â”

Foreign markets have become especially important, Ippolito said, because Italians have changed their approach to buying. “More and more we are becoming, how you say, provincial,” he said. “We stick to our own region. Each region is promoting its own wines very strongly. So we are losing market share in Italy.”

They should be able to make up for it here and elsewhere, for the wines are mighty tasty 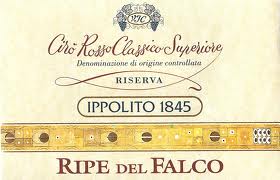 and food-friendly, especially with Calabrese dishes in that whole “if it grows together, it goes together” deal. Ippolito said the Greco “has the minerality to match with tuna. swordfish, spaghetti with anchovies” and that the Rosso “is fruity and spicy, and goes with sausage and spaghetti all’ârrabiata.”

Making the marketing easier is a pair of back stories around the greco. First off, the vines are planted “very close to the beach,” so low-lying that a lot of the vineyards flood in the winter “and the sandy ground gives it a lot of minerality,” Ippolito said.

And then there’s the harvest, two of them actually, a month apart, for the incredibly delicious 2011 greco: “at the end of August when it’s not ripe enough, for more acidity and aroma, and four weeks later, when it is much riper, with more sugar and alcohol. The balance is juicy and complex.”

Of the scores of winemakers I’ve yakked with, Vincenzo is the first to own up to such a practice. Must be that whole Italian open-book thing.