Judging at wine competitions is a great mix of work and fun, of grinding through some disappointing or discouraging flights and reveling in some swell ones. At the Riverside International Wine Competition, there’s an added bonus: getting to try varietals from all over the land, nortons and diamonds, 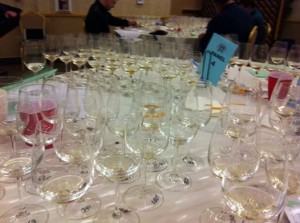 auxerrois and traminettes and yes, even concords that didn’t go into making jelly.

With New York major domo Jim Trevise and Minnesota minor domo yours truly on board, it’s not surprising that while others were plowing through scores or merlots and chardonnays, our panel got primarily wines from east of the west coast.

And a generally delicious lot they were. Winemaking is improving almost exponentially in the heartland as well as the region we Minnesotans call “out east.” In fact, the most disappointing flight was albariños that almost certainly came from more traditional places.

Some notes, quotes and anecdotes from Riverside:

• A few judges start a day before the rest of us, and when we gathered the next day, poohbah Dan Berger noted that 9 percent of Tuesday’s wines had been corked, then posited that after a mid-2000s correction, the cork industry was slipping again in reliability. But our group encountered only a couple of corked wines (guessing many if not most of ours were under screwcap). And one was so lightly corked that two of us didn’t notice it and were prepared to give it a silver medal. Once we got a “clean” bottle, we gave it double gold (all four judges scored it gold). Side note: I still catch mostly the really corked ones, and sometimes am a bit embarrassed about that, so it was kinda sorta heartening that another expert didn’t catch it.

• Best quip of the event came when we got a small flight of pinotage. “It’s the Special Olympics,” bellowed Clark Smith. That would most assuredly have gotten a spit take had I been sampling at the time.

• Clark Smith has forgotten tons more about wine over the years than I’ll ever know and certainly had the respect of the rest of the panel, who were seriously experienced judges. If 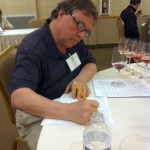 the other three of us didn’t care for a wine and he really liked it, we would revisit it, occasionally revising our assessment but usually only a little. All of us were willing to admit that we’re not infallible, which is a welcome trait at these competitions.

• Some edifying comments from Smith included two that concerned the same region: “Graciano is what makes Rioja work, gives the tempranillo some muscle” and “Tempranillo blanc could become the signature white grape of Rioja, and it was created by a complete accident.” My other favorite came as we were about to take on a flight of cabernets from Pas Robles: “These should be like a Tootsie Roll, with cocoa and orange peel.” Turns out those are two primary ingredients in Tootsie Rolls, and the Paso cabs did have that trait, which I never had noticed.

• I got to be the semi-expert on the flight of Minnesota red table wines, and all of us were wowed by one of them. We awarded it a double gold/best in class, and I was tasked with writing the tasting note: “Gorgeous nose of red berries and spice. The blend is brilliant with earth tones meshing beautifully with the red fruit and spot-on-tannins. Long finish with silky and earthy notes.” We asked our coordinator to get the grape components, and it turned out to be primarily marquette (56 percent) and frontenac (29 percent). We later learned that this gem was from Carlos Creek winery in Alexandria, Minn. Not surprisingly, Clark had an astute observation: “Marquette fills in the holes in frontenac. Everything frontenac is missing is in marquette.” 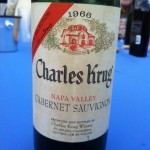 • The party on Wednesday night was a hoot, with Clark dressing up as the Tin Man to fit “The Wizard of Oz” theme (despite his almost-striking resemblance to Bert Lahr’s Cowardly Lion) and a few folks bringing some wonderful old wines. And while a magnum of 1994 Stag’s Leap Fay Vineyard cab was gorgeous, a wine I liked even more was much older: 1966 Charles Krug Cabernet Sauvignon. It actually was older than a few of the judges, but seriously lively and nigh onto fresh. Have I mentioned that I love this job?